Thomas Sully's Fairy Tales at the Milwaukee Museum of Art 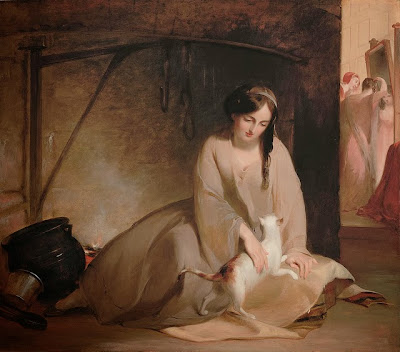 One of the most beautiful museums in the world architecturally, in my humble opinion, is the Milwaukee Museum of Art. The museum is actually three buildings, but I am referring specifically to the Quadracci Pavilion. It is very modern in appearance and sits on the edge of the water, looking like a ship at dock. It even has sails that move daily.

The Museum’s signature wings, the Burke Brise Soleil, form a moveable sunscreen with a 217-foot wingspan. The brise soleil is made up of 72 steel fins, ranging in length from 26 to 105 feet. The entire structure weighs 90 tons. It takes 3.5 minutes for the wings to open or close. Sensors on the fins continually monitor wind speed and direction; whenever winds exceed 23 mph for more than 3 seconds, the wings close automatically.

According to Santiago Calatrava, “in the crowning element of the brise soleil, the building’s form is at once formal (completing the composition), functional (controlling the level of light), symbolic (opening to welcome visitors), and iconic (creating a memorable image for the Museum and the city).”

The “wings” open at 10 a.m. in accordance with regular days of operation, close/reopen at noon, and close at 5 p.m. (8 p.m. on Thursdays). Schedule is subject to change without advance notice due to weather/maintenance.


The interior is also light and airy and a feast for the eyes. I am a classic person and love old European architecture, but I also just love stunning architecture and you can see some in motion at the museum. Pictures do not really do it justice.

So why am I talking about this museum on a fairy tale blog? Currently there is a special exhibit there, Thomas Sully: Painted Performance, and within it are two fairy tale themed paintings. They won't necessarily be your all time favorites, but if you are in the area and enjoy art, it's an extra reason to visit the museum. The exhibit is there from October 11, 2013–January 5, 2014, so it will be around if you are in the Chicago area, too, during the holidays. Milwaukee is a quick, very quick trip unless there is bad traffic, from Chicago, a little more than an hour if you can travel the 90 miles on a clear interstate. I know because I've done it. And there's plenty at the museum to see besides the Sully exhibit, too.

From Work in Focus: Cinderella at the Kitchen Fire:

One of Thomas Sully’s most important subject pictures—or “fancy” pictures as they are often called—is his monumental Cinderella at the Kitchen Fire (1843). The story behind it offers a fascinating look into the world of a nineteenth-century working artist.

From the late 1830s into the 1840s, several economic crises threatened the United States. This affected the portraiture market, since potential customers chose to spend less money on luxury items. This hit Sully right where he lived.

In response, Sully accelerated his production of subject pictures, which he intended to exhibit publicly and offer for sale on speculation. One of these was Cinderella, which he painted in less than three months. His daughter Rosalie (herself a talented artist) was the model for the beleaguered heroine.

Sully’s choice of Cinderella was a shrewd one. Since its first publication in America in 1812, the story had appeared in multiple editions. It had also been the subject of a popular opera that had toured the U.S. the previous year, including Sully’s hometown of Philadelphia.

Sully depicted his heroine seated among the ashes of the kitchen, taking a break from her drudgery to play with a lively cat. In the background, her wicked stepsisters vainly primp while getting ready for the royal ball. The scene is set for the Fairy Godmother to appear and transform Cinderella into the ravishing beauty who attends the ball and captivates Prince Charming, leading to her very own happily ever after. The delicate pink and gray tones of the painting—and Rosalie Sully’s modest expression—emphasize Cinderella’s youth, innocence, and beauty.

Sully exhibited this painting in Philadelphia and Baltimore, where it was eventually purchased by a rich industrialist collector, whose family owned it until well into the twentieth century.


The Cinderella painting is on loan to the exhibition from the Dallas Museum of Art. I've shared it previously on the blog with the story of its acquisition.

In addition, there is another painting, Sarah Esther Hindman as Little Red Riding Hood, which belongs in a small but interesting genre of paintings from the 19th century, portraits of girls as Little Red Riding Hood. I've posted about these before here and here. And I see additional ones randomly every so often. I always enjoy these as a symbolic representation of how pervasive fairy tales were in 19th century popular culture--after all this is the time period when the Grimms and others were working to bring their familiar collections to us--inspiring artists and families to want expensive portraits of young daughters as an iconic character. LRRH was Perrault's influence from over a 100 years earlier, of course, but the popularity of fairy tales is apparent. 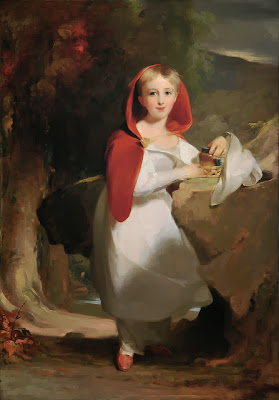