King Valemon, the White Bear: A Norwegian Beauty and the Beast Tale 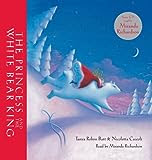 Hello all! I haven't forgotten to keep posting about tales in Beauty and the Beast Tales From Around the World

. My grandfather died last week and the weeks before and especially after have been more than a little filled with other needs. It's time to return to the tales I love, however.

I was going to work chronologically--and I will somewhat in coming days--but my grandfather was a proud Norwegian since both of his parents immigrated from Norway before his birth. Yes, that makes me a quarter pure Norwegian, too, going back only a few generations. And a quarter German and a quarter Swiss and an 1/8 English and an 1/8 Swedish. Yes, overall, I am a Scandinavian by blood. Which explains my grandfather's 95 years with us despite years of cigar smoke.

So I wanted to share a Norwegian tale today to honor him. The two choices from my book are East of the Sun, West of the Moon and King Valemon, the White Bear. I think everyone is fairly familiar with East of the Sun, West of the Moon around here since it is the quintessential ATU 425A tale. And it is annotated on the SurLaLune main site although I need to finish updating the pages in the section with new info. And I will talk about it, too, mostly in the vein of interpretations of the tale since there are many great ones.

It is easy to confuse East of the Sun with King Valemon since they both have big white bears in them. And often retellers will mix their details, as happens in Princess and the White Bear King

by Tanya Robyn Batt, in which the opening of King Valemon is used and combined with East of the Sun and The Black Bull of Norroway, a Scottish tale. Many of the Great Britain ATU 425A tales reference Norway.

There is also a Norwegian movie, The Polar Bear King

, which references the tale, too. 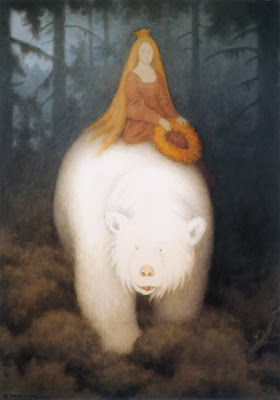 The tale synopsis from Wikipedia is better than what I can write in a few short minutes, so here it is:

A king had two ugly and mean daughters and one, the youngest, who was beautiful and gentle. She dreamed of a golden wreath. Her father set goldsmiths to make it, but none of them matched her dream. Then she saw a white bear in the woods, and it had the wreath. The bear would not give it to her before she agreed to go away with him, and got three days to prepare for the trip. The daughter did not care for anything as long as she had the wreath, and her father was glad of her happiness and thought he could keep off the bear, but when it arrived, it attacked the king's army and defeated them, unscathed.

The king sent out his oldest daughter. The bear took her on its back and rushed off with her, but asked her if she had ever sat softer or seen clearer, and she said she had, on her mother's lap, and at her father's court; so the white bear brought her back to the castle. The next Thursday it came again, and the king tried his second daughter, and she also failed.

The third Thursday, the king had sent his third daughter, and she had never sat softer or seen clearer, so it took her to its castle. Every night, it turned into a man and came to her bed in the dark. Every year, she had a child, but as soon as the baby was born, the bear rushed away with it. At the end of three years, she asked to visit her parents. There, her mother gave her a candle so that she could see him. At night, she lit it and looked at him, and a drop of tallow fell on his forehead, waking him. He told her that if she had waited another month, he would have been free of a troll-hag's spell, but now he must go to her. He rushed off, but she seized his fur and rode him, though the branches battered her, until she was so tired that she fell off.

The fourth night, she came to a hut where an old woman had many children who cried for food and had no clothing. The princess fed and clothed them, so the old woman had her husband, a smith, make her iron claws so she could climb the mountainside. With them, she reached a castle where the Troll-Hag was to marry the white bear. She started to clip out cloth. The Troll-Hag offered to trade for them; the princess insisted on a night with her sweetheart, and the troll-hag agreed but drugged him, so that she could not wake him. The next day, she bribed her way in with the flask; again the troll-hag had drugged him, but an artisan next door heard her and told the king. The third day, she bribed her way in with the cloth, and the king had not drunk the drink, and they could talk.

The king had them put a trap door in the bridge the bridal procession was to cross, and had it opened so that the troll-hag fell through it and died. They took her gold and went to his homeland for the real wedding, but on the way, they took the little girls, and the princess learned that they were her own daughters, whom the white bear had taken so they could aid her in her quest.


The tale also inspired the logo for Norsk folkeminnelag, the Norwegian Folklore Society. Yes, it looks like images for East of the Sun since she rides a white bear, too, but if you look in her hands, you'll see the golden wreath, the definite sign of a King Valemon tale. Besides, this image was obviously inspired by the Kittelson illustration I included above.

Labels: Beauty and the Beast, East of the Sun and West of the Moon, Norway