Fairy Tale Board Games on Sale Today Only


This is a today only deal but a great preparation for holiday parties or gifts. Amazon has a Gold Box Deal of the Day: Up to 50% Off Fun Games for Friends & Family

. One outright fairy tale game is included and two others that include fairy tale imagery which I have mentioned on the blog previously. There are also several other great games in the deal--like Scattergories Game

and Konexi, but those are not fairy tale related, so I won't go into them more.

First up is The Three Little Pigs Board Game

A FAMILY GAME WITH A CLASSIC TALE. As a little pig, your dearest wish is to build a strong and beautiful house in which you can spend your long winter evenings. But you won't need trowels nor scaffoldings, as only dice will allow you to construct your dream home. Beware the wolf prowling around, whose only thought is to literally blow away your comfy house. The Three Little Pigs is an easy and fun dice game for the whole family. At your turn, try to get the better combination with the 5 special dice and build the most lovely and sturdy houses, by adding doors, floors and roofs. And if you accidentally bring the wolf out of the wood, just take a deep breath and shatter other players' buildings by blowing on the wheel. This original game comes with an illustrated version of the famous tale it is based on. 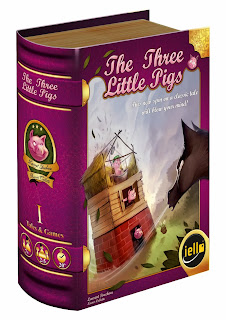 I've not played this--honestly, I didn't know it existed until I saw it here, but I will be playing it soon! Sounds fun for the kids in my life. 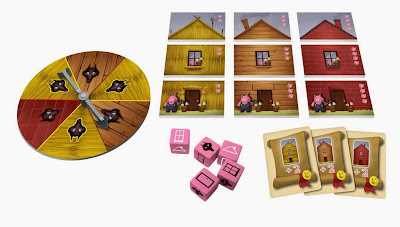 This next one I've mentioned on the site a few times and two versions are on sale today. This works with families or adults only. 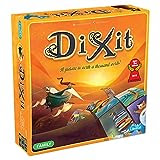 is $19.99. I love the illustrations in Dixit and bought it previously but haven't played it yet, I admit, since most of the kids in my life are still too young for it and I just bought it in August when it was previously on sale. We will be trying it this holiday season though when the older kids come to visit.

Dixit is the lovingly illustrated game of creative guesswork, where your imagination unlocks the tale. In this award-winning board game, players will use the beautiful imagery on their cards to bluff their opponents and guess which image matches the story. Guessing right is only half the battle – to really succeed, you’ll have to get your friends to decide that your card tells the story!

Every turn, the storyteller will call out a short phrase or word to match the image on his card. Then each player will choose the card that most closely matches that phrase, and then everyone must guess which card the storyteller saw when he invented his brief tale. Correctly guess the storyteller’s card, and you’ll move ahead. Convince everyone else that your card is best, and you’ll do even better

Dixit is a wonderfully simple game, playable by nearly anyone with whom you share a common language. With a fantastic range of beautiful illustrations and rules that can be understood by children and adults alike, Dixit will appeal to anyone with an imagination. It’s no surprise that Dixit won the Spiel de Jahres award for game design in 2010. It is brilliant and simple, beautiful and imaginative, and fun for all. 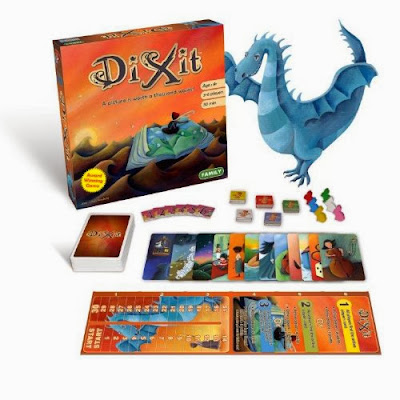 The second version is Dixit Journey

. It appears to be the same game with different images, it may be usable as an expansion pack since it is cheaper today at $19.99 than the usual Dixit expansions. But I am not familiar enough with the game to know yet.

A new and enriched environment where the sky is the limit for creating truly enchanting scenarios. Dixit Journey is a wonderful way to practice your skills at creating unique and subtle clues, while your friends test their abilities to bluff and mislead. A picture is truly worth a thousand words in this beautifully crafted board game that will be enjoyed by all. In each round one person assumes the role of "active player" where they create a clue made up of one or more words or can even be a sound or group of sounds. The other players will then try to mislead everybody by finding a card in their hand that also represents the same clue. Test your skills at correctly finding the solution to the clue. 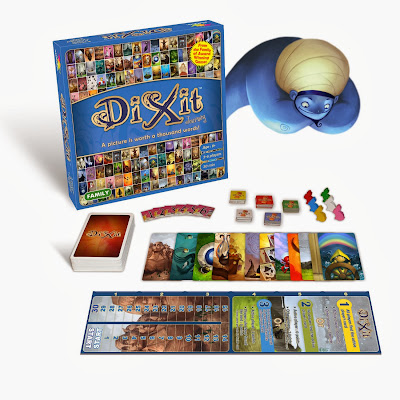 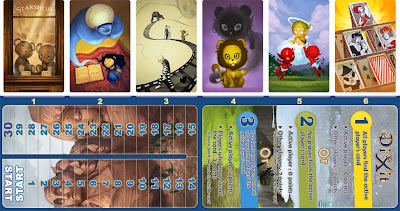 Posted by SurLaLune Fairy Tales at 11:33 AM