New Book: Film and Fairy Tales: The Birth of Modern Fantasy (International Library of the Moving Image) by Kristian Moen

Film and Fairy Tales: The Birth of Modern Fantasy (International Library of the Moving Image)

by Kristian Moen is officially released this week although it doesn't appear to be shipping from most online retailers quite yet.

Far from a realm of pure fantasy helping people to escape harsh realities, fairy tales and the films that rooted themselves in their tropes and traditions played an integral role in formulating and expressing the anxieties of modernity as well as its potential for radical, magical transformation.

In Film and Fairy Tales, Kristian Moen examines the role played by fairy tales in shaping cinema, its culture, and its discourse during its most formative years. Through analysis of early film theorists and detailed case studies of films of Méliès, Tourneur and Walt Disney, Moen shows how the visual tropes and theoretical vocabulary of the fairy tale negotiated different experiences of modernity - the giddy adventures of social mobility, consumer culture and identity transformation, the threats and anxieties of cultural change, impermanence and mutability. From the nineteenth century 'fairy play' to the self-aestheticising fantasies of Snow White and the Seven Dwarfs, Moen shows how cinema made fairy tales modern - and fairy tales helped make cinema what it is today.

And since this always matters to me, I have an image of the Table of Contents. It looks like we have the usual fairy tale film suspects with Méliès and Disney. 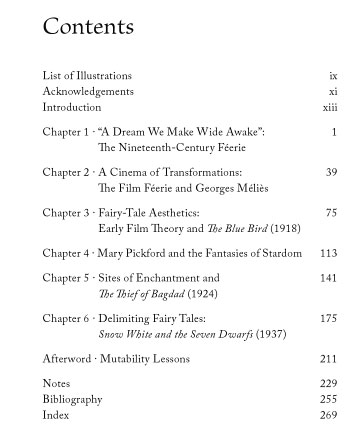 Posted by SurLaLune Fairy Tales at 10:28 AM