Dragon and Ogre Castle Toys on Sale Today Only


Today only, Amazon has the following deal: Gold Box Deal of the Day: 50% Off Select Fisher-Price Favorites

. Toys have already sold out on the list, but I had to round out my house's Imaginext Castle collection with two items that are a hit with the nieces and nephews. They are currently $17.49 each. The other toys in the castle series are not on sale, but these were the ones at the top of my wishlist, so I had a lucky day, saving at least $20 off the prices I had considered earlier. And there are other non-fantasy toys on the list, too, if you are interested. But dragons and ogres belong on SurLaLune!

The Imaginext Dragon is a new twist on kid-powered adventures. With a handle on his back and the ability rear up, this Dragon is the ultimate Imaginext Dragon. Squeezing the handle will lunge his neck forward, easily grabbing things (figures, boulders) with his mouth, and when you lift him off the ground his wings will spread for a quick getaway. Equipped with “Action Tech” technology a squeeze of his handle will send a signal to the castle to warn the knights within of the approaching Dragon. He even has his own lights and sounds to have a roaring good time.

Imagine … a world of action and excitement where you decide what happens next! This time, it’s a world of Medieval adventure, with a fist-smashing ogre that kids control! Squash! He can step on an Imaginext® figure—and it “sticks” to his foot! Grab handle & walk him along for stomping sounds! Spring-loaded fingers let him hold a figure! Press on his tongue for chomping sounds as he “eats” a figure! Requires 3 AAA batteries.


These are adding to the Fisher-Price Imaginext Eagle Talon Castle

of which I have an earlier version, nearly identical. (I lucked out again on a clearance price at a seldom visited K-Mart one day when I ran in looking for something else.) These are some of the most popular toys at my house and I love that they are not connected to a TV show and other merchandising. And the girls in my life like it as well although there needs to be more girl figures with the toy series, my biggest complaint with it. But they just use the girls from the Little People Lil' Kingdom Castle

that I also own. Before they made gender specific versions instead, darn them. But I have one enjoyed by all without any color programming. I know, you have a hard time imagining me with castle toys, right? 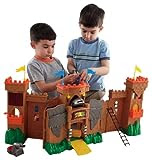 See these are the options now. Very discouraging:

As the girl who preferred boy oriented toys as a kid (and adult), I hate the color typing that made me feel "wrong" as a kid when I wanted to play and build instead of dress and makeup my toys. I didn't mind Barbies, but I only ever asked for one and then that was over. I spent more time with my blocks constructing homes for her than actually playing with her.


Posted by SurLaLune Fairy Tales at 9:16 AM