The Three Little Pigs and the Somewhat Bad Wolf

by Mark Teague was released a few weeks ago. Yes, another Three Little Pigs picture book. But this one deserves notice for its author/illustrator alone. And because we here never tire of fairy tale picture books anyway, am I right?

Do you realize you are probably already a Mark Teague fan? If you have ever enjoyed reading How Do Dinosaurs Say Goodnight?

or its many companion books written by Jane Yolen to a favorite child or just yourself and enjoyed the illustrations, you are a Mark Teague fan.

. (Which I just saw is bargain priced to $6.38 for hardcover on Amazon. I should pick up a few gift copies! It's that good and I haven't thought about it in a while.) I used it for piggy story times when I worked as a librarian and it has a place on my shelf, too. That was one of Teague's earliest books to feature pigs. And I don't think he has worked with fairy tales much either, so I hope this is only the beginning of a new creative avenue for him. I love his humorous, retro-influenced style. 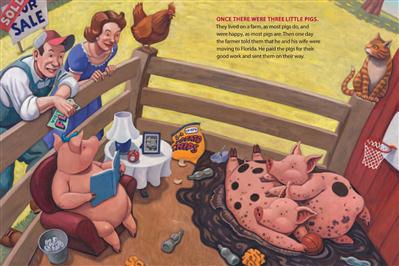 Award-winning author and illustrator Mark Teague tells his humorous version of "The Three Little Pigs" with a zany twist!

Three pigs spend their money on different things: potato chips, sody-pop, and building supplies. It comes as no surprise that a wolf is able to blow down the first two pigs' houses. When the wolf can't blow down the third pig's brick house, everyone comes together and the fun begins. The first two pigs give him potato chips and sody-pop, and the third pig makes everyone a healthy meal. Since only one pig has a house left, the other two pigs and the wolf move in with her. The somewhat bad wolf is no longer hungry.

Posted by SurLaLune Fairy Tales at 9:29 AM