I was saving Sugar Cane: A Caribbean Rapunzel

by Patricia Storace and illustrated by Raul Colon to highlight later this week when I discovered it is bargain priced on Amazon right now.  I wanted to post it sooner rather than later because bargain books can last for weeks or minutes on Amazon in my years long experience with them. Just follow the links and look for the bargain priced edition.  It's there currently for $5.04 in hardcover.  Great price at 70% off!

“You live in a tower without a stair,
Sugar Cane, Sugar Cane, let down your hair.”

Stolen away from her parents on her first birthday by island sorceress Madam Fate, beautiful Sugar Cane grows up in a tower overlooking the sea. With only a pet green monkey named Callaloo for company, Sugar Cane is lonely—her only consolation is her love of music. Often she stands at her window and sings, imagining that the echo of her voice is someone answering her. Then one night, someone does hear her song, but could this young man with a gift for music break the spell of Madam Fate and help Sugar Cane set herself free?

Patricia Storace’s lyrical and poignant retelling of the Rapunzel tale in a Caribbean setting is perfectly matched with Raúl Colón’s lush illustrations. An unforgettable feast for the senses.

In other words, this is a literary retelling of the tale by Storace set in the Carribean. It is not based on a Carribean tale but is infused with Carribean culture. It is lengthy for a picture book, more short story than short tale, but it is beautifully told and offers a different culture to the well-known European versions.  The quirk is that so many of the tales told in the Americas are adapted from European versions that came with the European colonists of various countries, so excepting the literary details and length, the tale feels like it belongs firmly in that culture.

The only concern for giving it to younger children is the length.  This is not a sit down and read it in one sitting with your four-year-old book.  It's excellent for an independent reader though and reading over a few nights with an older child, merely thanks to length.

And the illustrations are lovely, here are a few more to peruse: 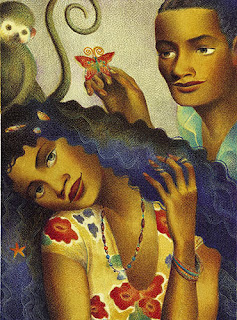 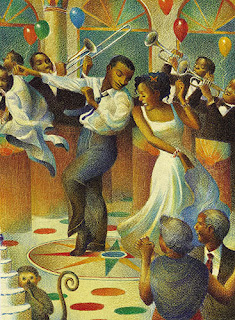 This is part of a series of books from Hyperion imprint, Jump at the Sun, which seeks to offer "minority" versions of tales, primarily African American. And Hyperion, for those not in the know, is a Disney owned company. There are many excellent fairy tales published by the imprint, mostly in paperback.  Sugar Cane: A Caribbean Rapunzel