Two Bargain Ebooks for the Day 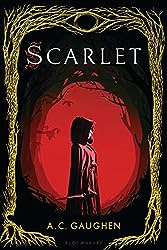 by A. C. Gaughen is on sale for $1.99 today only in ebook format. It's Robin Hood, so a folklore retelling, of course.

And while we're here, another book of interest to some readers here, Agatha H. and the Clockwork Princess (Girl Genius Book 2)

by Phil and Kaja Foglio, is also on sale for a short while for $1.99. It usually ranges in the $9.99 range and is full of steampunk fun. Very well reviewed, too.

Posing as one of Robin Hood's thieves to avoid the evil Lord Gisbourne, Scarlet has kept her identity secret from all of Nottinghamshire. Only Big John and Robin Hood know the truth-that the agile thief posing as a whip of a boy is actually a fearless young woman with a secret past. It's getting harder to hide as Gisbourne's camp seeks to find Scarlet and drive Robin Hood out of Nottinghamshire.

But Scarlet's instinct for self-preservation is at war with a strong sense of responsibility to the people who took her in when she was on the run, and she finds it's not so easy to turn her back on her band and townspeople. As Gisbourne draws closer to Scarlet and puts innocent lives at risk, she must decide how much the people of Nottinghamshire mean to her, especially John Little, a flirtatious fellow outlaw, and Robin, whose quick smiles and temper have the rare power to unsettle Scarlet. Full of exciting action, secrets, and romance, this imaginative retelling of the classic tale will have readers following every move of Robin Hood and band of thieves.

In a time when the Industrial Revolution has escalated into all-out warfare, mad science rules the world… with mixed success.

With the help of Krosp, Emperor of All Cats, Agatha has escaped from the massive airship known as Castle Wulfenbach. After crashing their escape dirigible, Agatha and Krosp fall in with Master Payne's Circus of Adventure, a traveling troupe of performers dedicated to staging Heterodyne shows—dramatizations of the exploits of Bill and Barry Heterodyne and their allies—who are unaware of Agatha’s connection to the Heterodyne line.

Pursued by the ruthless Baron Klaus Wulfenbach, his handsome son Gil, and their minions (not to mention Othar Tryggvassen, Gentleman Adventurer), Agatha hides in plain sight among the circus folk, servicing their clanks and proving herself adept in performing the role of Lucrezia Mongfish, nemesis to—and later wife of—Barry Heterodyne. She also begins training under Zeetha, swordmistress and princess of the lost city of Skifander. Together, Agatha, Krosp, and the performers travel across the treacherous wasteland of war-torn Europa, towards Mechanicsburg, and the ancestral home of the Heterodynes—Castle Heterodyne.

But with many perils standing in her way—including Wulfenbach’s crack troops, mysterious Geisterdamen, savage Jägermonsters, and the fabled Storm King—it’s going to take more than a spark of Mad Science for Agatha to get through…

From Phil and Kaja Foglio, creators of the multiple WCCA and Hugo Award-winning webcomic Girl Genius, comes Agatha H and the Clockwork Princess, a gaslamp fantasy filled to bursting with Adventure! Romance! And Mad Science!

Posted by SurLaLune Fairy Tales at 10:27 AM