Found these paintings with accompanying reviews at The Portland Press Herald (in Maine) in Review: Sheer poetry: the paintings of Nancy Morgan-Barnes by Daniel Kany. The paintings are from two different small exhibits of the artists' works, but it is fascinating that both would have a Little Red Riding Hood image to share. They are so very different, too, which makes a nice juxtaposition for today. Here are short excerpts from the article with the paintings, but you can read more at the article itself. 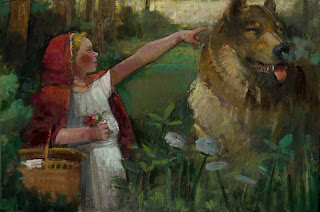 Nancy Morgan-Barnes's painting "Little Red Riding Hood," now on view in Greenhut's side gallery, however, is a poetic presentation of a story.

Despite the myriad versions of the fairy tale, Morgan-Barnes's Red Riding Hood fits the Brothers Grimm's without problem: The apple-cheeked and creamy-skinned heroine is pointing toward Grandma's house and explaining her venture to the boldly handsome wolf. But Big Bad is lost in dastardly scheming: He stares off distractedly while smoke drifts up from his nostrils. Two deer watch from afar -- rightly concerned but too timid to act. 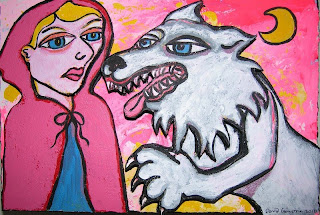 David Cedrone's show at Coffee Design also features a Red Riding Hood -- but it could hardly be more different. Cedrone paints in a loose and happy cartoon style that is wholly dedicated to legibility and simple fun. Instead of telling the story, Cedrone's version is like a portrait of the odd pair -- not in action, but self-consciously posing.

Cedrone's works strike a cheery and immediate impact: We recognize Red and Big Bad, but we aren't challenged to figure out where they are in the story. Just as Morgan-Barnes's complex density insists on a slower reading or poetic parsing, Cedrone's theatrical cartoonishness matches the bright immediacy of his subjects.

Posted by SurLaLune Fairy Tales at 10:32 AM