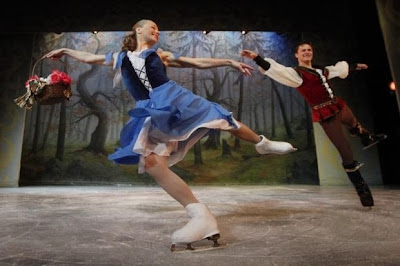 Romance, treachery and skating skills were the order of the day at the Theatre Royal as The Russian Ice Stars kicked off their five-day Glasgow stint of Snow White on Ice.

The show runs for the next four nights at the Hope Street theatre, which has been transformed to accommodate industrial pool liners and some four tons of ice.

Irina Tkachuk and Valdis Mintals play the starring roles of Snow White and her prince in this take on the classic fairy tale, The show, which combines ballet, gymnastics, aerial aerobatics and ice-skating is billed as a real family event for adults and children alike.

How much fun would that be? And we all know that I am not even a big Snow White fan although I have been becoming more so over the past year with all of my reading and research of the tale.  And really, it's ballet, gymnastics, aerial aerobatics and ice-skating, a smorgasbord of stuff to love.  Performed by Russians.  And not as strange as Cirque du Soleil at its best, I imagine.


Alas, it is in Glasgow right now and probably elsewhere in the UK, not anywhere near me.  And then I had to go hunting for an official website since this is Russian and obviously touring.   SnowWhiteOnIce.com is fun with even video bits which just tortured me more.  Don't miss the images either, which I couldn't capture with my software in the state it is right now.  I am still in that annoying state of figuring out new computer settings and capabilities and inabilities, but they are much better than the news photo I provided above.
The site also lists several tour dates around the UK.  Look it up and have fun if you see it.  I wish I could tag along...
Posted by SurLaLune Fairy Tales at 7:43 PM