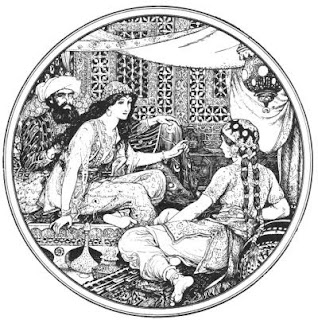 Oh, you generous readers. Reader Sarah sent me a link to an article I missed in The Guardian that appeared several days ago, Grandmother's footsteps by Germaine Greer.

In short, it is a wonderful article about Old Wives' Tales and the history of storytelling, focusing on the Italian history, especially with Straparola and Basile. Of course, the French salons and the Grimms are discussed in brief, too.

What I was doing was as old as the human race, and women have always done it. Even the most refined aristocrat of antiquity would have been told nursery stories by his first attendants, who were illiterate slaves and peasants. When it came to building a fanciful narrative of his own, he would recycle the same elements, changing them fundamentally in the process. The idiom of the original tale had to be standardised, and the events reinterpreted, to make the kind of sense that educated people would recognise, even to the point of ironic subversion of the fantastical elements in the story. Illiterate women went on providing the staple of the repertoire at the same time as educated people were turning their own variants of the tales into literature. As long as neither the women nor the children they told their tales to could read, the two kinds of tale-telling could flourish side by side.

The first collector of popular tales for print is known to us now as Gianfrancesco Straparola, who was connected with the Venetian publisher Comin de Trino. As "Stra-parola" means something like "crazy talk", we may be sure that this was not the real name of the author of the Piacevoli Notti (1550–1556). Following the convention established by Boccaccio's Decamerone (1353), the Straparola tales are set in a framing narrative, a 13-day party at the palace of the Bishop of Lodi on the island of Murano during carnevale; the narrators are 13 ladies. Two of the tales are recounted in dialect, one in Bergamasco and another in Paduan. The Straparola stories are pretty good examples of the kinds of stories old peasant women tell. The fashionable lady who tells the five stories on the second night pretends that the second of her tales is set in Bohemia, but it soon becomes clear that we are dealing with a story about the people living on the shores of the lagoon.

As always the article is much longer and merits a click and read through. It is full of history as well as a personal anecdote by Greer as the introduction.

In her email, Sarah said "It made me wonder if perhaps she's thinking about a book-length work on the subject." After reading the article, I hope Greer is considering a project related to the topic.

But if she doesn't, as always, one of the best books along similar lines is From the Beast to the Blonde: On Fairy Tales and Their Tellers

by Marina Warner. I also recommend The Great Fairy Tale Tradition: From Straparola and Basile to the Brothers Grimm (Norton Critical Editions)

edited by Jack Zipes as a supplement.

The illustration is by H. J. Ford for Andrew Lang's The Arabian Nights' Entertainments