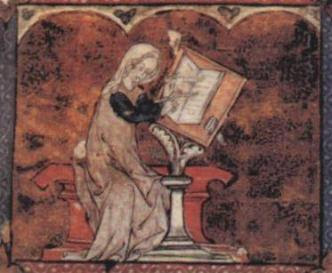 Marie de France ("Mary of France") was a poet evidently born in France and living in England during the late 12th century. Virtually nothing is known of her early life, though she wrote a form of Anglo-Norman. She also translated some Latin literature and produced an influential version of Aesop's Fables. Marie de France was one of the best Old-French poets of the twelfth century. She identifies herself only as Marie who originated in France. Nothing else definite is known about her.

From The Oxford Companion to Fairy Tales:

And in case you were wondering, "a Breton lai (or lay) short is a rhymed romance supposedly practiced by Breton storytellers; elements of the supernatural, chivalry, influence of classical and Celtic mythology (land of faerie)." (From Marie de France page.)

The lais are interesting and one, the Lay of Eliduc, is distantly related to Snow White. You can read one translation of the lais at French Mediaeval Romances from the Lays of Marie de France at Project Gutenberg.

And here's an excerpt from my article about Snow White that appeared in Faerie Magazine last fall and will appear again in my upcoming collection of Snow White and Sleeping Beauty tales:

Another interesting variant [of Snow White], Gold-Tree and Silver-Tree, comes from Scotland. In this tale, the mother seeks to kill her beautiful daughter. The father deceives his wife and sends his daughter to another king to be married. Despite these precautions, the mother murders her but her devoted husband refuses to bury her. Eventually he marries again and his second wife revives the first wife. She offers to leave but the king chooses to keep both wives who become friends. The second wife later kills the wicked mother during another murder attempt. Then the king and his two wives live happily ever after together. Since polygamy wasn’t common in Scottish history, scholars speculate that the tale traveled there from a country in which the practice was more accepted.

This Scottish tale bears a strong resemblance to The Lay of Eliduc by Marie de France first recorded in the late 12th century. The lay is a Christianized version of the story with Eliduc as the king. In this version he doesn’t keep both wives. His first wife enters a nunnery instead of living in a plural marriage. Eventually Eliduc and his beloved wife enter into holy orders, too. At first reading, the lay appears unrelated to the version of the tale that is so well-loved today, but its relationship to the less popular variants is obvious upon closer inspection.