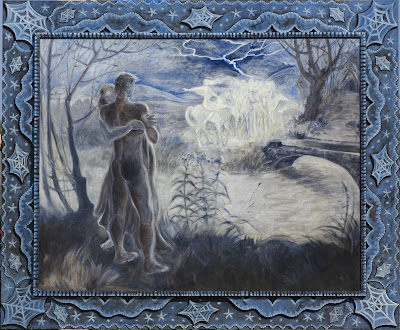 Today's post at SMoST is Fairytale Reflections (15) Gillian Philip. Philip chose one of my favorite tales, one that I didn't learn until my teenage years when I read Joan D Vinge's version in Imaginary Lands

edited by Robin McKinley. Later, my fascination was solidified after reading Pamela Dean's novelization of the tale

That tale is, of course, Tam Lin.

Here's an excerpt from Philip's thoughts about the tale. As always click through to read it in its entirety:

As a child I don’t think I was aware of the story of TAM LIN, one of many mortal men stolen away by the Queen of the Faeries. I’m not even sure when I first read or heard such tales; stories of the faery people were simply a kind of background music that I gradually noticed and that came to fascinate me. Tam Lin is just one variation on a theme that sometimes has a happy ending, more often less so: a mortal – more often than not a man – is foolish or brave or naive enough to go away with the faeries.

There’s a recurring notion that once involved with the People of Peace, you’re going to need all your wits, courage and – usually – the help of a friend to get away. More often than not, even all of those aren’t enough, and that makes many of the stories melancholy.

Tam Lin is a little different, and that’s why I’m fond of it. The traditional ballad begins with a warning not to go to the woods of Carterhaugh, because young Tam Lin is there – a man who was taken by the Queen of the Faeries, who now protects their sacred woods, and who will demand a penalty of anyone who trespasses. Earlier versions are pretty clear about what that penalty will be... and when young Janet, whose father nominally owns the wood, dares to go there to pick roses, she comes back not just wildly in love, but pregnant. 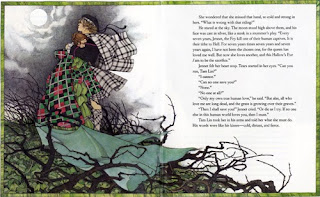 Now for some of Philip's own books:

The image at the top of the page is by Dan Dutton and can be found on the excellent Tam Lin website (the best resource on the web for learning about the tale) or at Dutton's website. The second is by Charles Mikolaycak from his illustrations for Jane Yolen's picture book of Tam Lin

Thanks again to Katherine Langrish for an excellent series.
Posted by SurLaLune Fairy Tales at 8:49 AM