1-2-3: A Child's First Counting Book by Alison Jay, as author and illustrator, is a book that escaped my notice until my friend Valerie shared it with me this week. She has been enjoying it with her two-year-old son.  It is a counting book that uses fairy tale characters and tales to provide the counting fodder.

One little girl wakes up to a wondrous fairy-tale world. She spies two dancing feet from the Golden Goose tale, three hungry bears just visited by Goldilocks, and four royal mattresses between the Princess and the Pea. Simple in format, with many objects to count on each colorful page, 1 2 3 is just right for children learning their numbers 1 through 10. As in her ABC

, acclaimed as "beautiful," "inventive," and "marvelous," Alison Jay captivates with this clever work of art, treating readers of all ages to visual surprises, scenes from ten favorite fairy tales, and witty stories-within-stories.

It was published in 2007 and received favorable reviews from the major review sources, too.

The copyright page provides a key to the fairy tales that appear in the book.  Here's an image below: 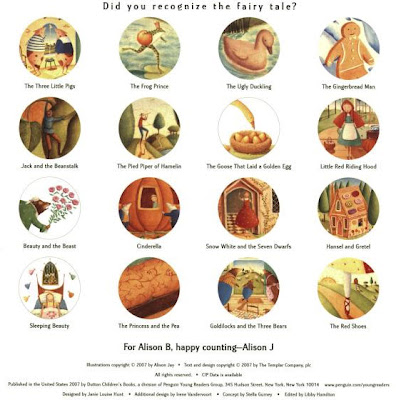 A review from Publishers Weekly:

Starred Review. In a sumptuous companion to her A B C, Jay takes readers on an enchanted journey from 1 to 10 and back again, with help from fairy tale figures. A quartet of self-satisfied frog princes impressively embody the number 4, while a plate of gingerbread men—including one poised for escape—represent the number 6. (Other counting opportunities abound in the backgrounds.) As in the previous book, Jay unspools a story-within-the-primer. One little girl, who has fallen asleep while reading, is transported to the magical landscape on the wings of the Goose That Laid the Golden Egg; this same bird serves as her chaperone as she visits the subsequent scenes as an amazed onlooker. At number 9, the goose is reunited with her precious-metal eggs, and the girl finds herself cast as Little Red Riding Hood and other heroines as the numbers reach 10 and head back to 1. Close attention will reveal other links; for example, the view of Jack's beanstalk (created from seven magic beans) also includes one of the eight rats who figure prominently in the following spread, inspired by the Pied Piper of Hamelin. The pictures are a wonder to behold: Jay's flattened perspectives, gently faded colors, crackle-glaze finishes and lean, angular characterizations vaguely evoke the dreamy, ambiguous narrative qualities of medieval art. And yet the pictures never feel like museum pieces—rather, they're like missives from a universe where it's Once Upon a Time 24/7. Ages 3-up. (Sept.) Copyright © Reed Business Information, a division of Reed Elsevier Inc. All rights reserved.

A review from School Library Journal:

PreSchool-Grade 3—In this beautiful companion volume to Jay's ABC (Dutton, 2003), a child ("one little girl sleeping") dreams that she travels on a large golden goose ("two soaring wings") to visit a variety of nursery rhymes and fairy tales. Each place she visits has things to count: "three little pigs," "four frog princes," etc. The text is simple, with only three or four words on each page. The real story is told through the paintings done in Jay's familiar crackle-glaze style of simple shapes, jeweled colors, and soft lines. In each picture, the artist includes delightful details that reward observant viewers. For example, the page that says, "Eight running rats" also includes eight shoes, eight cupcakes, and a tiny view of the beanstalk from the previous page. The girl and the goose can be found on every spread, which adds continuity to the story. Some pages have hints of things to come, like the six beans lying on the table next to the six gingerbread men, foreshadowing the "Jack and the Beanstalk" scene on the next page. This clever picture book will delight the very young as well as children already familiar with the fairy tales.—Donna Cardon, Provo City Library, UT Copyright © Reed Business Information, a division of Reed Elsevier Inc. All rights reserved.

You can read more about Alison Jay here. She has also worked with other fantasy and fairy tale themes including these below.  I love her relaxing and somewhat retro style.