Ponyo [Gake no ue no Ponyo] by Miyazaki 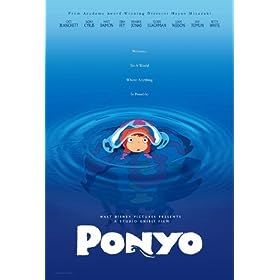 Thanks to several readers' comments and emails, I am now aware that Ponyo, released in the U.S. this past weekend by Disney (official release site here), is based on Hans Christian Andersen's The Little Mermaid.

Here's the description from Amazon which I found to be the best after reading several articles.

Ponyo confirms Academy Award®-winning director Hayao Miyazaki's reputation as one of the most imaginative filmmakers working today. Loosely based on Hans Christian Anderson's "The Little Mermaid," Ponyo is a magical celebration of innocent love and the fragile beauty of the natural world. The daughter of the sea goddess Gran Mamare (voiced by Cate Blanchett) and the alchemist Fujimoto (Liam Neeson), Ponyo (Noah Cyrus) begins life as an adventurous little goldfish. Chafing at her father's restrictions, she goes in search of adventure and meets Sosuke (Frankie Jonas), a good-natured 5-year-old who lives by the sea. Sosuke adopts Ponyo and quickly wins her heart. Fujimoto uses magic to bring her back, but Ponyo's love for Sosuke proves stronger than his elixirs. She transforms herself into a human girl and returns to him during a spectacular storm at sea, but her metamorphosis upsets the balance of nature, precipitating a crisis only Gran Mamare can resolve. Ponyo contains fantastic moments that suggest dreams-- and reassert the power of hand-drawn animation to create memorable fantasies: No effects-laden Hollywood feature can match the wonder of Ponyo running along the tops of crashing waves on her way back to Sosuke. Ponyo is closer in tone to My Neighbor Totoro than Spirited Away or Howl's Moving Castle, and will appeal to audiences of all ages, including small children. The #1 film in Japan in 2008, Ponyo earned more than ¥14.9 billion (over US$155 million) to become the 8th highest grossing film in Japanese history.

I also enjoyed these articles: The appeal of Ponyo, Ponyo: A Role Model For Kids With Autism? and Michiyo Yasuda makes the story colorful.

Overall, the reviews--to which I decided not to link--are positive, even glowing. However, the movie barely made the top ten in sales last weekend. I know this was the weekend for final back to school shopping for some--school resumed in my area last week--but other parts of the world are still enjoying summer break. Sounds like this movie would be a great last fling in a dark, cool theatre away from the summer heat. I know I'm curious to see the movie and compare it with the original and Disney's The Little Mermaid, too.

Red hair, it appears, has become ubiquitous to the mermaid character. It has not always been so. Look at the Little Mermaid Illustration Gallery to see for yourself.
Posted by SurLaLune Fairy Tales at 6:00 AM