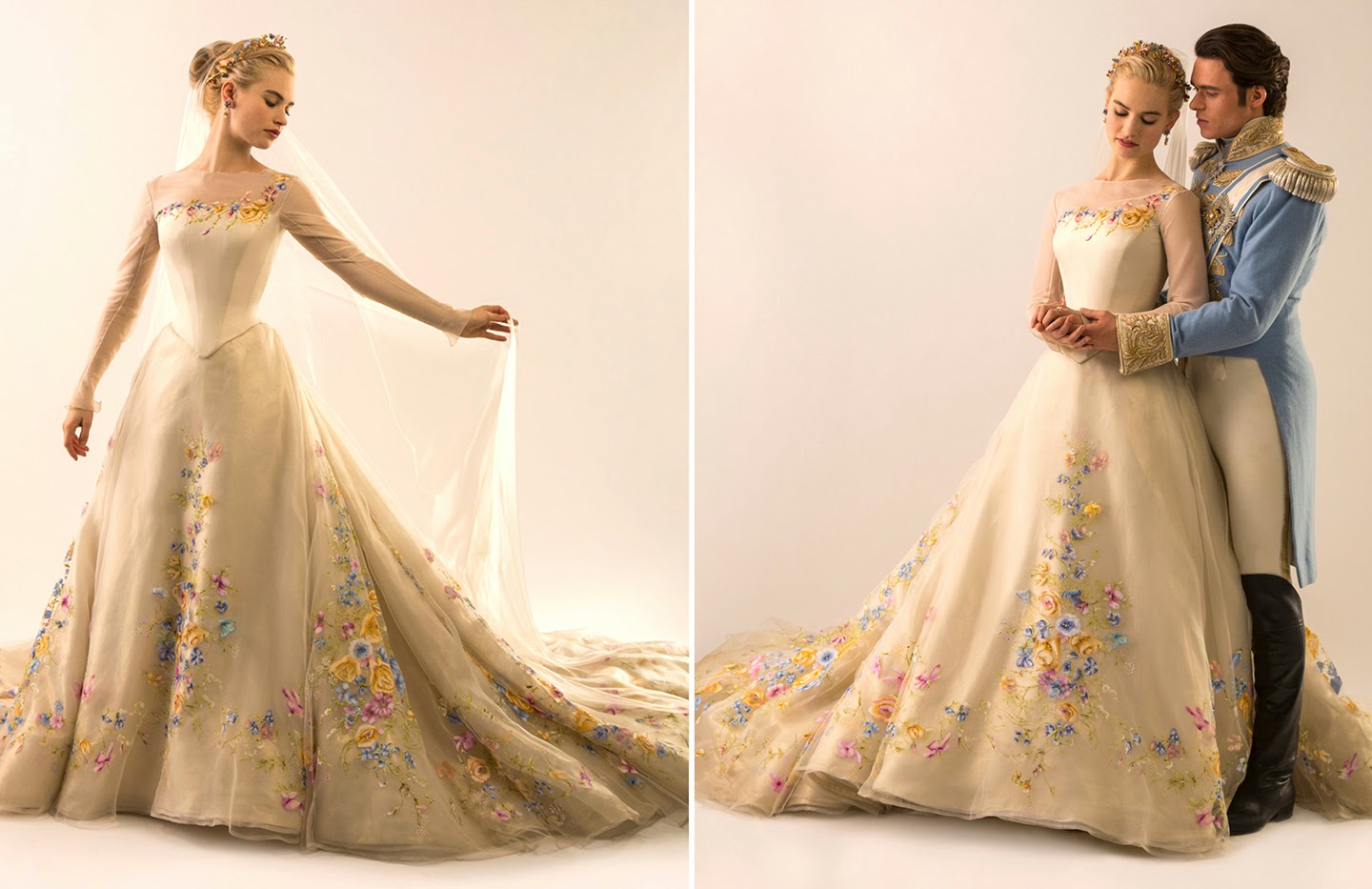 Cinderella 2015 Wedding Dress, images from Vanity Fair.
Yesterday I saw the new Disney's Cinderella film, what was essentially a women's ritual in my immediate family that included my sister, her daughter (my five-year-old niece), my mother, and my sister's mother-in-law. I love all of these women and between all of us we have a very diversified relationship with Disney and its products. I am really not in the mood to write a review. I've thought about the film, yes, but analyzing it for its story is almost pointless. There is some, but not much, that diverges from the original animated Disney's Cinderella. The acting was fine, the sets were beautiful, the costumes were overall stunning. I will not forget Cinderella's wedding dress which was much more elegant and less little girl's dream than Cindy's ballgown which was just a tick or two below over the top ridiculousness. Really, it balanced on the precipice. I imagined the laughs they all had when shooting the dance scenes trying to choreography with and around that skirt. I see a new trend in wedding dresses either way. And the costumes in the early idyllic life scenes were making me long for spring in ways I haven't quite had time to do yet this year.

The rest of the women in my group loved the film to varying degrees, with little Kensie the most enthusiastic. She proceeded to dance and dance and dance at the bottom of the theatre steps after the film, a mix of romantic and pent up energies after sitting for too long energies since there was once again a plethora of previews before the film that lengthened it by too much by far, nevermind some that were not appropriate for the youngest audience members. But I digress. And am reminded of why I prefer home viewing of movies anymore. And then there were the first three trailers and commercials that were played without picture, just sound, until I got up to find someone to fix the problem although we were far from the only people in the theatre. I was amused and wondering if anyone would go and didn't even hear any conversations to that point, my innate observer tendencies entertaining me much more than any trailer could. But I was there for Kensie so I went and found someone to fix it for us.

My favorite line in the entire movie? "I speak French, not Italian." Only gotten in context but my only genuine surprised laugh. Most of my entertainment was from watching Kensie watch the movie. She is a princess incarnate and loves all of these fantasies and has a rich imagination. She also is getting other tales and stories and I am far from worried about her romantic expectations of life. She is a child who has only grown happier over the years as she has gained more autonomy. If there is a child who has hated being a child and the lack of control of her life it offers her, she is it. But she has a rich fantasy life that gets her through her frustrations where she grows up to be Queen of the Universe with many superpowers. And she firmly got the message that courage and kindness are much more important than beauty although in this movie, let's face it, beauty is a commodity as well. My mother pointed out that the real princess is beautiful, too, just the physical antithesis of Cinderella. The Prince prefers who.

That said, the few story changes that are there were richly borrowed from both Ever After and The Slipper and the Rose. The conniving stepmother is very much Ever After. Cate Blanchett did amazing things with her lines and never chewed the scenery. I would love to see what she would have brought to Ever After, although I've always been satisfied by Angelica Huston's performance in that. The "you must marry a princess" politic were much more The Slipper and the Rose, but not as heavy handed and never felt nearly as threatening to the ending as they do in Slipper.

But I admit as I compared it, I longed to watch Ever After again. There is a richness to the characters in that one while these characters only ever stayed flat for me and suffered by comparison. I liked this Cinderella just fine, but I didn't see growth in her, just an abiding patience which I am all for admiring--not all my heroines need to be Agent Carters or Wonder Womans or even Annas or Elsas--but it didn't give me much to see or explore beyond that one level, there wasn't a real struggle for her and her justified pain was nearly invisible relative to the level it deserved.

Overall, this is a perfect Disney product. It delivers exactly what it promises. There is nothing new here, but it is pretty and entertaining and will delight millions as it should. And it is very pretty, very, very pretty. I love pretty and this makes great wallpaper.