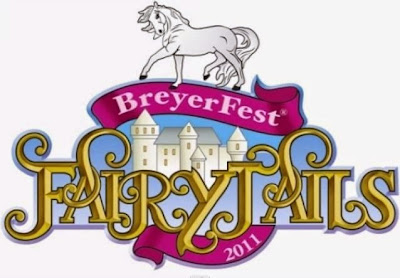 You probably can't fully appreciate this post without reading yesterday's Fairy Tales and Breyer Horses: Part 1. I want to thank Christine Ethier for sharing her images and knowledge and sending me to other resources for much of today's post about the BreyerFest 2011 Fairy Tail event.

Every year, Breyer has a celebration called BreyerFest held at the Kentucky Horse Park. The celebration includes a vast amount of Special Run models. These include the Celebration Model (you buy a ticket to go, you get this model), Tent Specials, Raffle Models, and so on.

Breyer’s most obvious connection to fairy tales occurred at the 2011 BreyerFest where the theme was fairy tales. Many models with fairy tale names were produced, including four Stablemates named after the fairies from Disney’s Sleeping Beauty, a set called Hansel and Gretel (strangely a mare and foal), a series of horses based on Rumpelstiken, as well as a horse based on the “Little Mermaid”. For a complete look at all the horses produced for the Fairy Tale event, use this link to Identify Your Breyer: BreyerFest 2011. The website also includes a complete listing of all Breyer models. 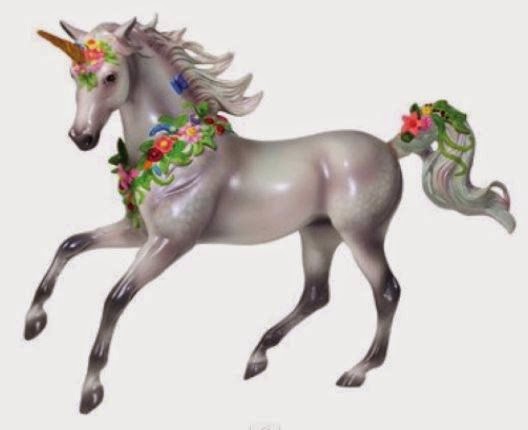 Aurora
The aforementioned unicorn, Aurora is decorated with flowers around the base of her horn, around her neck, and on her tail. She has dappling and gray points, and appears to have some kind of multicolored pink-and-teal pearlescent thing going on. Aurora will be a porcelain model. 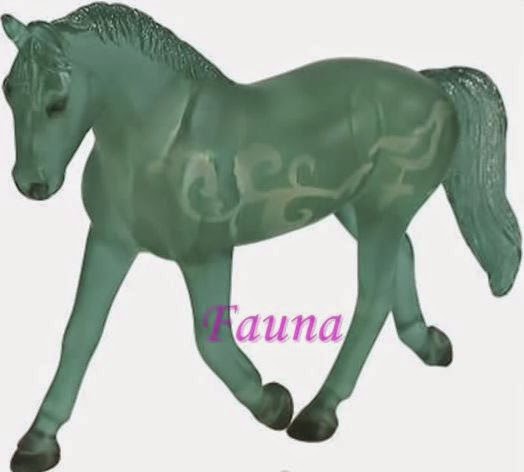 Flora, Fauna, Maleficent, and Merryweather
These four Stablemates molds in vivid Decorator colors will only be available as the Single Day Ticket Gambler's Choice Model. Flora is a pink Endurance, Fauna is a teal Driving, Maleficent is a peacock blue Rearing Andalusian, and Merryweather is a sky blue Friesian. 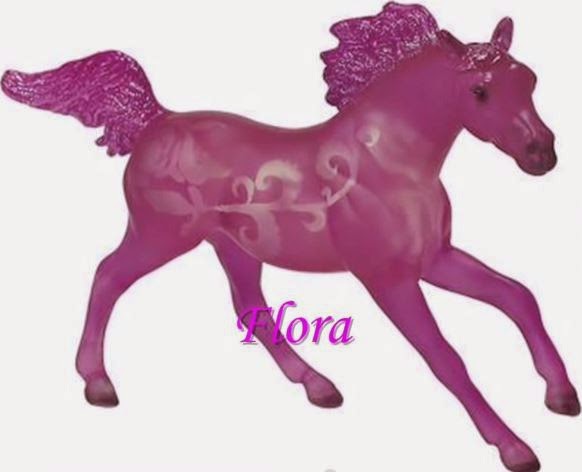 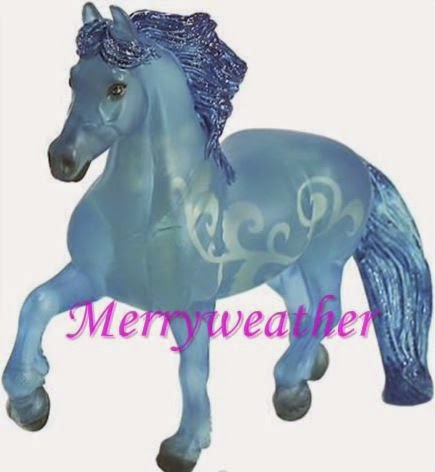 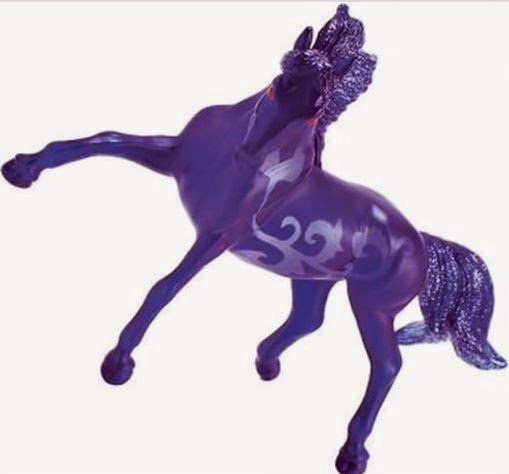 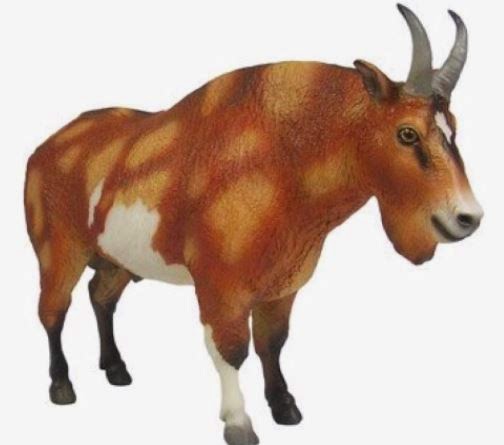 Gruff
The Mountain Goat mold, a natural for the Fairy Tales theme! Gruff has some nice detail work, a four-color coat with a reddish base, lighter spots, white patches, and dark gray markings. (Do goats come in bay?)

I don't know what to call the lighter spots. I went a'Googling for goat coat colors, and the variety is amazing. But I couldn't find a name for the big spots. I shall call them Mega-Dapples.

I'm glad to see more non-horse models getting some spotlight time. I never got around to writing about this year's benefit model, which benefits the SPCA. It's an adorable set with a horse, a dog, and a cat. Love it! It seems like the non-horse models get short shrift - which makes sense, really - but I love seeing them get their proper due. 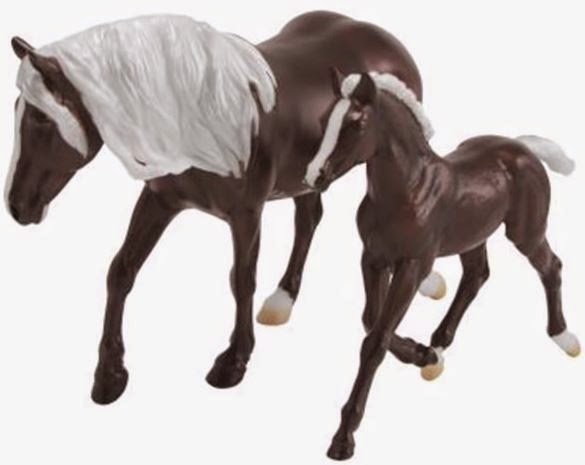 Hansel and Gretel
These are both Classic scale models, a size which seems to be largely overlooked by collectors, but still popular with hobbyists. These are both NEW models for 2011, sculpted by Brigitte Eberl. I can't find any more information on these models online. Judging from their proportions, they may be ponies? At any rate, it's a lovely paint job on both mama and foal, with a chocolate brown body and white mane and tail. 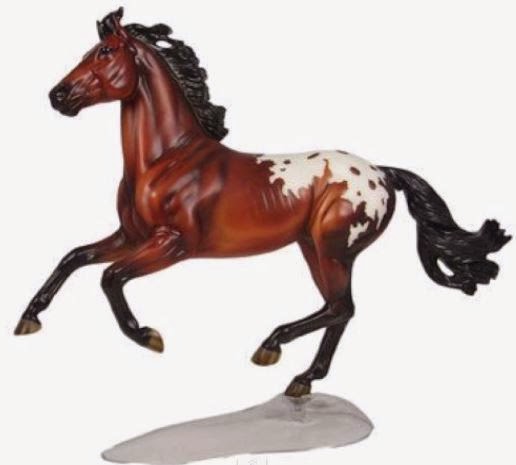 Once Upon A Time
A beautiful dark red bay with an appaloosa blanket, using the Show Jumping Warmblood mold.

This is a handsome model, but I don't really get the Fairy Tales tie-in with this one, aside from the name. Is there a pun here I'm missing? Like how Wish on a Star has a star-shaped marking? 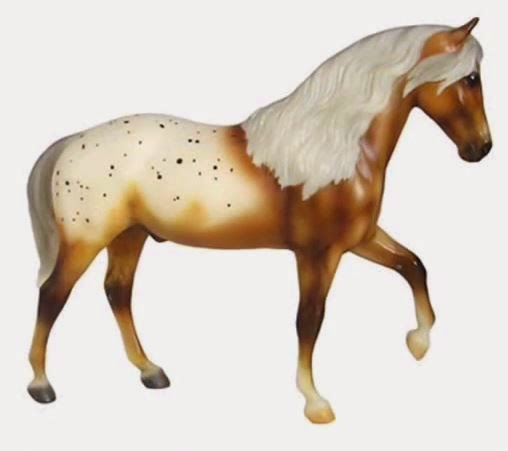 Perrault
Only three Perrault molds will be available! They are the Early Bird Raffle Prize, so you'd better get your tickets ready! Perrault is a leopard palomino appaloosa on the El Pastor mold. 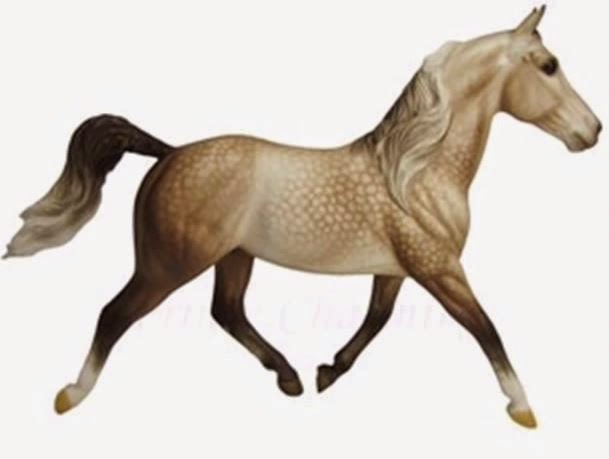 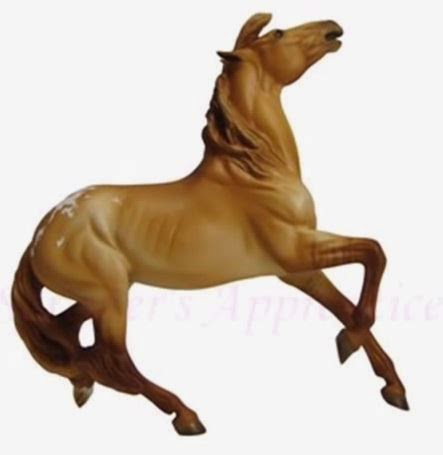 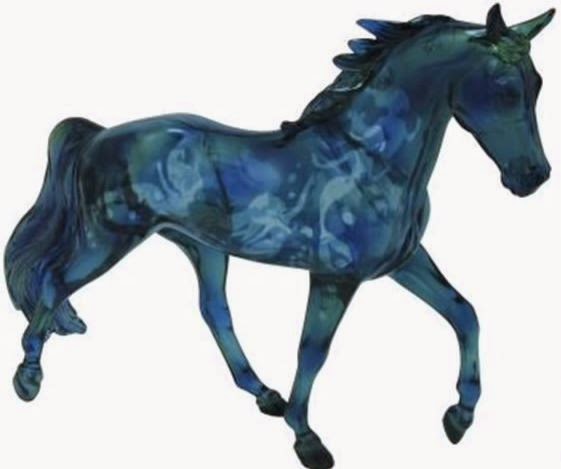 Under the Sea
This is a swirly blue Decorator version of the Bluegrass Bandit, designed by Kathleen Moody and Summer Prosser in 2008. Is the model made of translucent plastic, or is that just how it looks in the pictures that have been released? I guess we'll have to wait to find out!

From Heidi: If you do an image search for Under the Sea online, you will see that it is translucent and quite pretty! 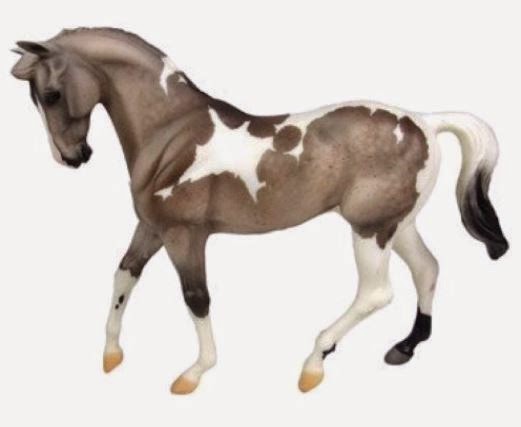 Wish on a Star
This is a really outstanding tobiano pinto paint job on the ever-popular Big Ben mold. He appears to be a dappled gray, or possibly a blue roan base color with dark points, a bicolored tail, and a big splashy star-shaped marking on his shoulder. 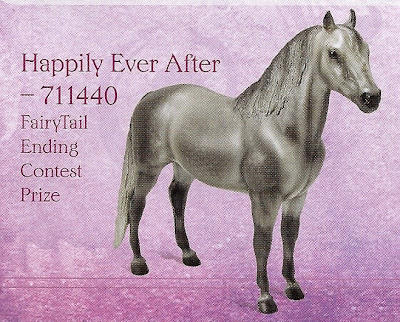 Happily Ever After
This is a dappled gray Justin Morgan. Only one will be made, as the prize for the Fairytale Ending contest. 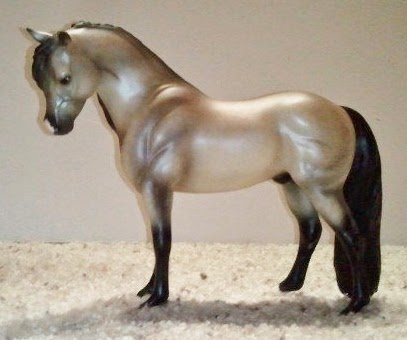 Tom Thumb
Posted by SurLaLune Fairy Tales at 9:40 AM