by by Eric A. Kimmel (Author), Laura Huliska Beith (Illustrator) was released earlier this year. I recently received a review copy and was rather tickled by the book--a new twist on Little Red Riding Hood, obviously. Kimmel has a series of Texan-influenced fairy tale retellings and this is one of my favorites in the bunch.

I've been quiet on the blog as I finish upcoming books in the little free time I've enjoyed this summer. But I have been also getting in a few minutes here and there to update pages on the SurLaLune main site, such as Book Galleries and Modern Interpretations pages. If you are interested in seeing more of the latest releases of Little Red Riding Hood books, go to the Book Gallery.

On with some comments and images from the book: 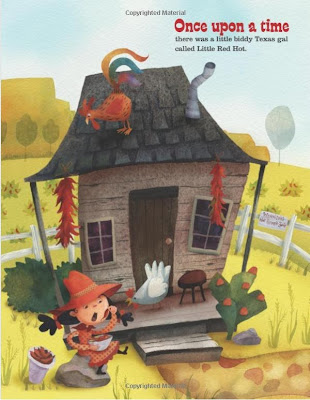 I've read countless interpretations of Little Red Riding Hood over the years and this one offered a new, unexpected premise:

Folks called her that because she loved to eat red hot chili peppers.

Folks used to say that Little Red Hot could eat fire out of a stove.

Little Red Hot would answer, 'No, I wouldn't do that. Fire ain't hot enough!' 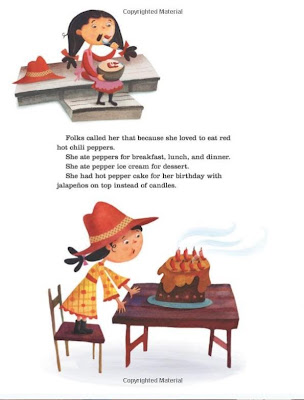 And that sets up a fun story with a feisty heroine. How she uses the peppers to outwit the wolf is pretty much expected but still fun all the same. Laura Huliska-Beith's illustrations show that Little Red Hot is never fooled by the wolf, but is only toying with him until she can get rid of him with little danger to herself.

And, for concerned parents, neither Grandma nor any other character is ingested in this book. Little Red Hot saves herself although she gets a good warning of danger from Pecos Bill. All ends happily and some pepper knowledge is shared along the way in both the text and the author's notes. 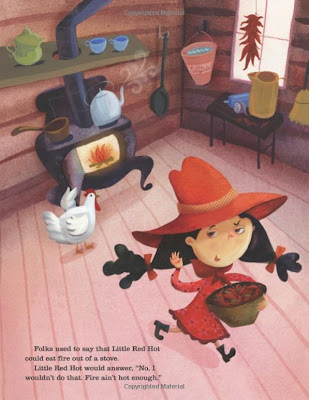 Little Red Hot loves red hot chilli peppers. She eats them for breakfast, lunch, and dinner. When her grandmother catches a cold, Little Red makes her a hot pepper pie that will "knock those cold germs right out of her". But before Little Red shares her pie with Grandma, she meets Señor Lobo. The pie comes in very handy when the wily wolf tries to trick her into thinking he's her grandmother.

Posted by SurLaLune Fairy Tales at 11:16 AM