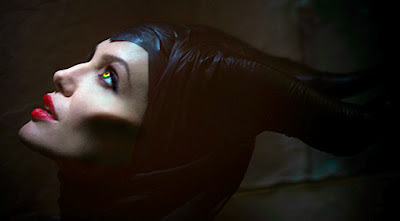 She's everywhere the last few days--timed to ride the wave of the sucess of Snow White and the Huntsman, I think.﻿ I got to talk to a friend who has read the script and I won't say much--I don't know much--but the horns are real in the film--not Maleficent's own styling choice--so the costuming will be interesting throughout, methinks.

This won't be released until March 2014 although we all know that is always subject to change. It will be 3D, too. So the fairy tale trend will continue for a while yet!

This is the untold story of Disney's most beloved villain, Maleficent, from the 1959 classic "Sleeping Beauty." The film reveals the events that hardened her heart and drove her to curse the baby, Aurora. Behind-the-scenes talent includes Academy Award®–winning cinematographer Dean Semler ("Dances with Wolves," "In the Land of Blood and Honey"), production designer Gary Freeman ("Saving Private Ryan," "The Bourne Supremacy"), two-time Oscar® nominated costume designer Anna B. Sheppard ("Schindler's List," "The Pianist") and seven-time Academy Award–winning makeup artist Rick Baker ("Planet of the Apes," "Men in Black").


Here's an excerpt of an interview with Jolie about the film from EW:

In this version, Sleeping Beauty is the nemesis instead of the good guy?

It’s not anti-princess, but it’s the first time they’re looking at this epic woman.

Is it sympathetic to her, or is she a straight-up villain?

It’s both. I hope in the end you see a woman who is capable of being many things, and just because she protects herself and is aggressive, it doesn’t mean she can’t have other [warmer] qualities. You have to figure out the puzzle of what she is.

So there are some redeeming qualities to Maleficent the witch?

It sounds really crazy to say that there will be something that’s good for young girls in this, because it sounds like you’re saying they should be a villain. [Maleficent] is actually a great person. But she’s not perfect. She’s far from perfect.

There’s a tradition of taking a classic character who is a villain and telling the story from his or her perspective. John Gardner did it with the 1971 novel Grendel, and more recently we got the witch’s story in Gregory Maguire’s Wicked, and the musical it inspired. We like it when the bad guy is deeper than we thought.

In general, it’s a very good message to say, “Let’s look at something from the other side.” But then also, what our challenge will be — and the script writer [The Lion King and Alice in Wonderland’s Linda Woolverton] has already cracked it — is not to simplify it, not to just reverse the story but tell a bigger story that doesn’t point the finger [at Princess Aurora] either. It doesn’t flip it.

Since it’s a Disney film, will this version of Maleficent be close to the one we know from their 1959 animated film?

We’re still figuring out the look. We’re experimenting with different things. But the horns are the horns — you can’t deny them. You have to have horns.