Sad Underwear and Other Complications: More Poems fo Children and Their Parents by Judith Viorst

Sad Underwear and Other Complications: More Poems fo Children and Their Parents by Judith Viorst

is today's poetry feature as a follow-up to yesterday's first Judith Viorst post.

Today I am offering an image of Viorst's poem, "...And Beauty and the Beast, Once the Spell Had Been Broken, Lived Happily (Sort of Happily) Ever After." It's Viorst's take on Beauty and the Beast. Again, there are a few more fairy tale poems in this collection but this is one of my favorites. If you want to see the other poems, most are visible in the online Amazon preview through the Look Inside the Book feature

. Again, this poem is copyrighted and offered as a preview of the book which is inexpensive and slim and totally deserves a place on your shelf whether you are a kid or a grown-up along with its companion book, If I Were in Charge of the World and Other Worries: Poems for Children and their Parents 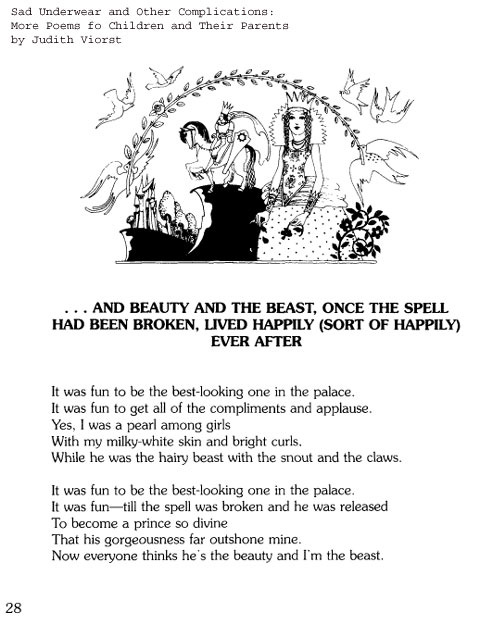 And again while we're here, more great books by Viorst. Some of these would make great Mother's Day gifts actually.

And if you know a little girl begging for an ear-piercing or earrings in general, this is a superb book:

And Viorst contributed to What the Dormouse Said: Lessons for Grown-ups from Children's Books

Labels: Beauty and the Beast, poetry