Snow White and the Huntsman Images, Website and Such 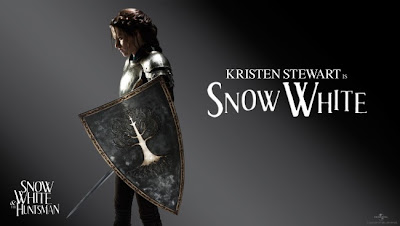 •The images were dark, gritty, and definitely not traditional. Claflin and Hemsworth looked like rugged soldiers in their costumes, Theron still had her blond hair but looked fierce with a high collar, clutching a scary-looking dagger. There was one picture of the dwarves, who are played by regular-sized actors like Nick Frost and Ray Winstone and made to look dwarf-szied (and there were eight — Sanders slipped that one dies in the film). The final reveal was Kristen Stewart as Snow White, and does she ever look hardcore: she's in full armor with a shield and disheveled hair. This is definitely no bedtime story.
•Stewart said she liked the idea of playing Snow White because the character "doesn't let her heart cloud her mind and get in the way" of doing what she needs to do, and called her "the people's leader." Plus, it sounds like she's pumped to take on the apparently action-heavy flick — she cited "sword stuff" and "really cool weapons" as other reasons she was excited about the movie.

And finally, since I have neglected to post this earlier in the month when it was announced, this film is now becoming a trilogy of films. From Kristen Stewart's 'Snow White' Project Planned as Trilogy:

Kristen Stewart's take on Snow White will not end right after she completes filming "Snow White and the Huntsman". Joe Roth has recently said that he plans to make the folktale action-adventure movie into a trilogy with the upcoming June 1, 2012 release as the first installment.
"It's meant to be the first in a series of films," the producer told Entertainment Weekly. "This story will end, but there will be questions remaining for these three characters," he further revealed, referring to the title characters as well as the evil queen.

Speaking about the characters, Roth said that Stewart's Snow White will be different from the sweetly-singing princess seen before. "She starts out not a damsel in distress, but innocent, and after 11 years of imprisonment by the Evil Queen, she escapes and learns the ways of a warrior in the woods," the 62-year-old filmmaker explained. 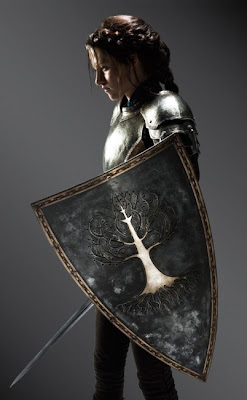 Posted by SurLaLune Fairy Tales at 9:25 AM