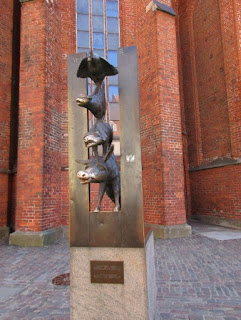 Nearly two years ago, I had the opportunity to go on a Baltic cruise with my husband and parents. I shared some of my adventures on the blog then, but then life distracted me again. I still have several treasures from the trip to share here.

One of our ports of call was Riga, Latvia. There were other discoveries that day but this one merits its own post. A sighting of the Bremen Town Musicians near St Peter's Church in the Old Town. I had a few sightings of this tale on the trip as I recall, but this was a favorite.

As always, you can click on these images to see them larger. 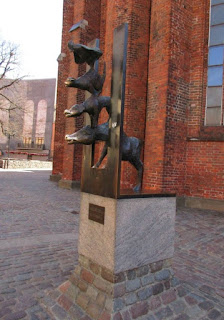 At the time, I didn't understand that this statue was politically inspired. I just thought it was another instance of affection for the tale--which it is--but deeper meaning was also intended here. After all, Riga was once behind the Iron Curtain. Here's what I discovered when I sought more information about the statue:

From the Live Riga site:

The political monument "Bremen Town Musicians" was created by Bremen artist Krista Baumgaertel. The sculpture is based on a fairy tail by the Brothers Grimm, but created with a political subtext as it was inspired by Mikhail Gorbachev's perestroika. The sculpture, a gift from Riga's sister city Bremen, was made in 1990. It's a humorous approach towards previous political stereotypes. The bronze figures are not staring through the window at the robbers' feast at a table full of drinks and food; they are peering through the Iron Curtain on a completely new world where they had thought to find a bone or a piece of meat. Come see the musicians - an ironic view at sudden independence. 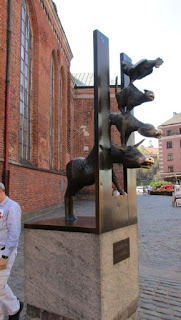 Posted by SurLaLune Fairy Tales at 7:35 AM