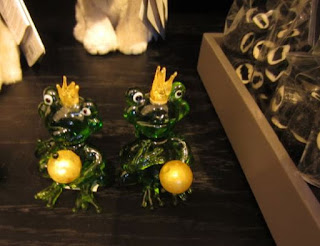 As I mentioned in my last travel post about our day visiting the national art museum, Hans Christian Andersen at Frederiksborg Castle, the final destination by design is the gift shop in a museum. Well, we visited this one and I found a few treasures--badly photographed here--to share.

First discovery were the little glass Frog Kings pictured above. Which made me laugh since Frog Kings are so ubiquitous and have nothing to do with Hans Christian Andersen. But it's not surprising that the Frog King is the first tale to be found in the Grimms' collection. I liked this version of the frog since he also holds the gold ball that is rarely remembered from the story. 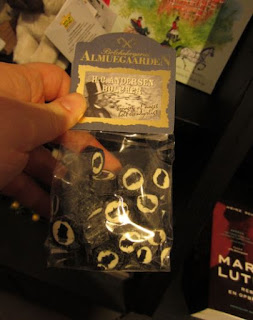 Moving on, I found some Hans Christian Andersen candy. I didn't buy any--my purchases for this entire trip were minimal and well, it wasn't chocolate. :) Besides, if the label didn't tell you, it would be hard to know this was HCA themed candy. The silhouettes aren't very distinct. 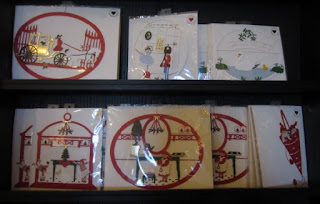 There were a few HCA fairy tale books--nothing new that I hadn't seen before and I forgot to photograph them as a result. But I found these papercut ornaments to be my favorite finds. I was tempted to buy them all until I did the math. They were expensive (about $19 USD each) so I settled on my favorite--the Princess and the Pea, of course.

I was rather sad that there wasn't a good book to buy--the best ones were ones I already owned and I don't own that many HCA books. Well, relative to other people, I do, but he's not the focus of my folklore library. So I was hoping something would be new to me. But the papercut ornaments seemed fitting so I was happy to find one of those to commemorate the visit. 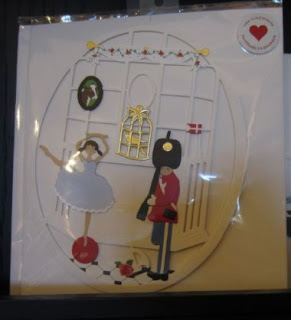 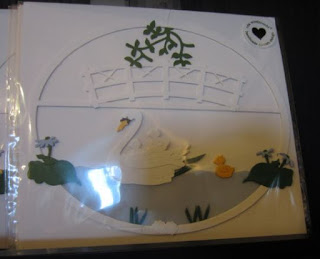 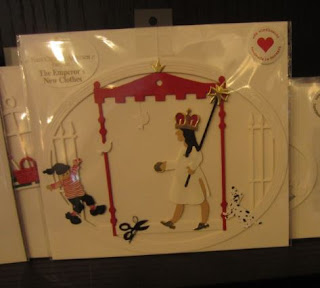 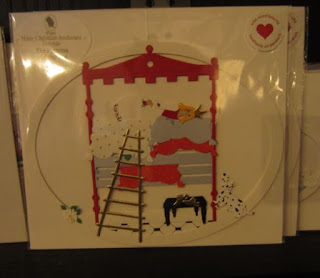 The Princess and the Pea

Sorry the photographs are dark. You can see the entire collection of HCA themed papercut art by at Oda Wiedbrecht's site with much better photographs, of course. Here is a scan of the one I bought: 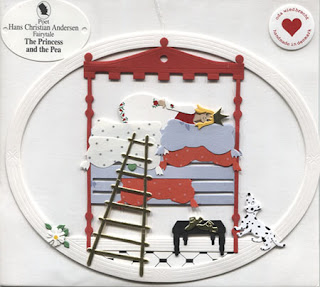 Bonus round: As I mentioned, we traveled to the castle by train. I was surprised to find the following message above my head as we waited for the train that morning--whimsical and so very U.S. The world really has gotten smaller. But it was a fitting reminder of how I wanted to spend my day from an unlikely source so I was tickled by it. 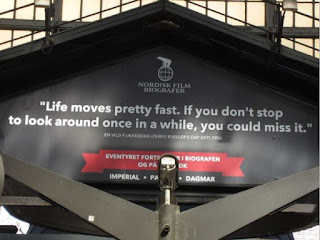 And on a similar note, I saw many posters that day advertising a Danish performance of "Into the Woods" at the Tivoli which is essentially the performing arts center of Copenhagen as well as a famous amusement park. I got a bad picture of it--the goal was to get it before several people walked in front of me and to avoid glare. Not very successful. John and I are reflected in the lower right corner. 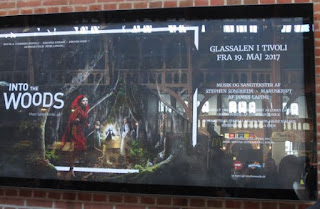 But I found the poster again on the Tivoli site for the performance that happened on May 19th. Wonder how well the music--if it does--translates into Danish. Not sure if this was a musical version or not.

And this again shows the universal influence of the Grimms. I've really got to get to Germany next time!