Bargain Ebook: Cinderella Ate My Daughter: Dispatches from the Front Lines of the New Girlie-Girl Culture 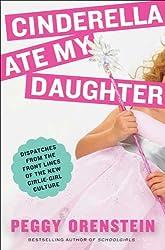 Cinderella Ate My Daughter: Dispatches from the Front Lines of the New Girlie-Girl Culture

by Peggy Orenstein has been temporarily dropped to $1.99 in ebook format. It was $2.99 a few years ago during another sale, but this is the lowest price I've seen for it to date, probably the lowest it will ever be.

As I've said previously, for this price, it's a good book to have around as a touchstone in the fairy tale gender discussions, although the book is more slanted towards Disney discussions specifically if I remember correctly. I've continued to see articles related to the book in the three years since it was published, so this has been an important influence in recent discussions in the mainstream world.

The rise of the girlie-girl, warns Peggy Orenstein, is no innocent phenomenon. Following her acclaimed books Flux, Schoolgirls, and the provocative New York Times bestseller Waiting for Daisy, Orenstein’s Cinderella Ate My Daughter offers a radical, timely wake-up call for parents, revealing the dark side of a pretty and pink culture confronting girls at every turn as they grow into adults.