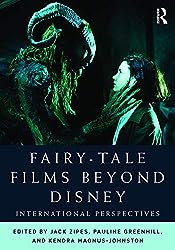 by Jack Zipes (Editor), Pauline Greenhill (Editor), Kendra Magnus-Johnston (Editor) was released last week. I haven't seen a copy of yet, so this is just in nature of my usual book announcements.

The fairy tale has become one of the dominant cultural forms and genres internationally, thanks in large part to its many manifestations on screen. Yet the history and relevance of the fairy-tale film have largely been neglected. In this follow-up to Jack Zipes’s award-winning book The Enchanted Screen (2011), Fairy-Tale Films Beyond Disney offers the first book-length multinational, multidisciplinary exploration of fairy-tale cinema. Bringing together twenty-three of the world’s top fairy-tale scholars to analyze the enormous scope of these films, Zipes and colleagues Pauline Greenhill and Kendra Magnus-Johnston present perspectives on film from every part of the globe, from Hayao Miyazaki’s Spirited Away, to Jan Švankmajer’s Alice, to the transnational adaptations of 1001 Nights and Hans Christian Andersen.

Contributors explore filmic traditions in each area not only from their different cultural backgrounds, but from a range of academic fields, including criminal justice studies, education, film studies, folkloristics, gender studies, and literary studies. Fairy-Tale Films Beyond Disney offers readers an opportunity to explore the intersections, disparities, historical and national contexts of its subject, and to further appreciate what has become an undeniably global phenomenon.

"Fairy tales, like the air we breathe, surround us constantly and, usually, transparently in contemporary media cultures. Zipes and his collaborators explore these narratives that we take for granted, exposing the inanity of most Hollywood productions and bringing to light the transgressive, creative cinemas of independent and international filmmakers. We'll never think 'happily ever after' again without a pause to reflect on the implications." ―Donald Crafton, author of Shadow of a Mouse: Performance, Belief, and World-Making in Animation

"Thinking globally and acting locally, Jack Zipes and his collaborators have produced a landmark volume that reveals how fairy-tale enchantments have worked their magic in cinematic productions the world over. The partnership between film and fairy tale, we suddenly discover, is exactly what the dream factory needs to create its coming attractions." ―Maria Tatar, Harvard University, author of The Annotated Brothers Grimm

"This incomparable book of essays projects a panoramic view of fairy-tale films that is only possible when a multidisciplinary team of talented scholars collaborates. With its international scope and expert analyses, Fairy-Tale Films Beyond Disney lifts the curtain on spectacular realms from around the world." ―Donald Haase, Professor of German and Senior Associate Dean at Wayne State University