A BEAUTIFUL BEAST: A Discussion of Panna A Netvor by Megan Kearney 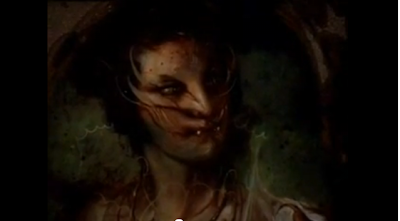 Today we have another post about Beauty and the Beast films, this time by Megan Kearney. I want to thank everyone for these guest posts. I am unfamiliar with Panna A Netvor due to its rarity, so posts like these increase the knowledge of the SurLaLune repository.

Please remember that you, too, can still participate, read more at Fairy Tale Film Month. (This is the last of the guest posts in the queue for now if no one else participates!) And, no, you don't have to write as much as these previous posts and you can talk about the more common films, too. Even the most ordinary and cliched films can sometimes make us think about a fairy tale a little differently. 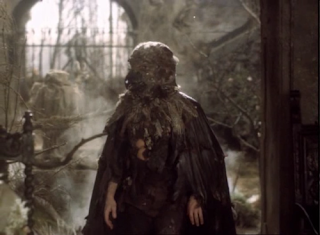 A BEAUTIFUL BEAST: A Discussion of Panna A Netvor

Cocteau's La Belle et La Bete existed for forty years as the definitive film version of Beauty and the Beast. Others appeared, but almost always as imitations and simple retellings. It was not until 1991, with Disney's Beauty and the Beast, that we saw a new definitive version appear (it should be noted that this "definitive version" departs drastically from the original tale -- as all of Disney's works do) In this Pre-Disney version era, Herz Juraj's 1978 Czech film Panna A Netvor (The Virgin and the Monster) was a departure. It was neither an imitation of Cocteau, nor a slavish retelling of Beaumont's fairy story. The character of the Monster was more fleshed out, and indeed, sympathetic, than any before. With a unique visual direction, and unorthodox filmography, Panna a Netvor was striking. While little-known outside of Europe, It remains one of the loveliest and most engaging variations on Beauty and Beast to date.

VARIATIONS ON A THEME

The traditional Beauty and The Beast Tale, usually springing from Villeneuve and Beaumont, is at play in Panna a Netvor, but with several distinct twists. As in East of The Sun, West of The Moon, the heroine is forbidden from looking upon her captor. This simple fact changes her story arc entirely. This is not the young girl with the giving heart who pities and comes to care for a monster. Instead, this girl, Julie, falls in love with someone she believes to be human --and rejects him when she learns the truth.

The monster's curse, a flexibly thing in any retelling (Cocteau's Prince claims his parent's did not believe in Fairy tales), is only alluded to here. We know Netvor (literally, "Monster") needs blood to survive, and we know he is both tempted and tortured by Julie's presence in his home. Cocteau's Beast was drawn sexually to his Beauty. Netvor is drawn by a more traditional predatory instinct. Hints of decadence and perhaps a demonic bargain are sprinkled here and there, but his curse is not one with clear delineations. We get the feeling that Netvor himself can't quite remember what he originally was, and he is as shocked as we are when his transition to humanity begins.

The transformation of The Beast is usually reserved for the end of the story -- after a promise of marriage, declaration of love or sexual encounter. In Panna a Netvor, the transformation is not so abrupt, and hinges on both character's perception of monstrosity. Julie, believing Netvor to be a man, sees what little of him she does as such. When she grabs for his hand, it isn't a malformed talon she holds. Her belief in his humanity begins to make it real. Netvor realizes this, and when she confesses that she's been longing for him, he asks that she just keep dreaming. We feel Netvor's shame and sorrow when Julie accidentally sees his reflection, shattering both the illusion she holds of him, and his chances at becoming the man she dreams of. 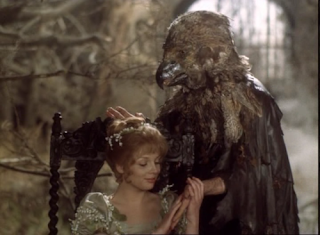 THE SUBLIME AND THE SURREAL

Visually, Panna A Netvor strikes a counterbalance to Cocteau. The Cocteau film presents a polished and restrained face -- The sets are sparse and clean. The costumes are neat. Beauty and her Beast walk with painful formality through the gardens. This surface orderliness serves to accentuate the barely-contained eroticism that bubbles beneath. Cocteau sought to evoke the works of Dore and Vermeer and to create a sensuous world. Panna a Netvor does just the opposite. Drawing instead on the works of Bosch and the surrealist movement, Herz creates a world that is damp, disorganized, perpetually shrouded in mist, and teetering always on the brink of rot.

If La Belle et La Bete is sensual, then Panna a Netvor is nearly sexual. The Beast is not a neatly kept lion in a frilled collar, but a bedraggled hell-crow, clad in tatters, with misshapen talons for hands. He resides in a ruined mansion at the heart of a late-autumn wood. The courtyard is filled with dead leaves, fallen trees, and rancid, smoking pools. The house is no better -- a maze of fallen beams, cobwebs, furs and rotted curtains. The surrealist element is at play in Netvor's mansion: Doors are later discovered to be paintings and beds easily become coffins. The manor is kept by devilish looking fire-imps, who acknowledge the audience from their hiding places in chandeliers and fireplaces, but are never seen by the characters.

We break with this dark style twice in the film. When Julie dreams that her prince has opened the cover of her coffin/bed (a Snow White reference?) the two whirl about in a haze of soft-focus, frothy billowing curtains and mirrors -- every inch the cliche fairy tale film. Although the movie does indeed end on this note, when this stylistic change is first introduced, it is broken nicely by a shot of reality -- She is not in the arms of a fine young man, but rather, the claws on the Beast are upon her throat.

The camerawork of Panna a Netvor is noteworthy as well. Herz makes Interesting choices, using a handheld camera for many shots, indulging in long uninterrupted takes, and even shooting events from character's points of view. Early in the film, when the trader girl is killed, and later when Julie's father is in Netvor's mansion, the camera acts as the Monster's eyes. This shlock horror film technique is at home here. First-person filming achieves the effect of putting the viewer in the role, first of a predator, and then of an outsider. We become complicit in Netvor's actions (and also allow Herz to hold off on the reveal).This unpolished camerawork, largely utilized in Netvor's mansion, is intentionally jarring and uncomfortable for the viewer, and it is used here to great effect. 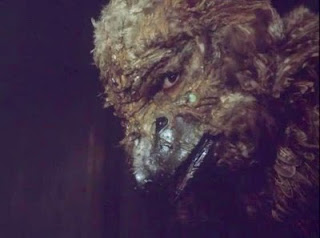 BEAUTY IN THE BREAKDOWN

Played by Zdenka Studenkova, Julie takes a backseat to Vlastimil Harapes' Netvor. She suffers from the cookie-cutter fairy tale heroine role so common in this sort of movie, and she's a bit unsympathetic for it. Only mid-film, when she begins to fear that she is going mad, do we find her engaging. Interestingly, although she is tempted to catch a glimpse of Netvor in a mirrored piano top, Julie sidesteps the Pandora stereotype. When she does break her promise and grabs for his hand, she is not punished for her curiosity, as in East of The Sun, West of The Moon, Cupid and Psyche, or BlueBeard. Instead, through her disobedience, Netvor's transformation is begun and their relationship progresses.

Panna a Netvor may be viewed in terms of Julie's progression towards adult love. When she comes to the mansion, she dreams of a handsome prince, and indulges in this fantasy, dancing with statues, and not having the sense to fear "a strange man" who won't let her see him. towards the climax, she leads Netvor to her bed and confesses her romantic fantasies. Netvor gently tells her to continue dreaming for now. When Julie prematurely sees the face of the monster she is terrified. She tries to tell herself it doesn't matter, but ultimately, she rejects him and flees. Only when she has grown enough to accept him as he is does she return, and find the ability to transform him into a man. 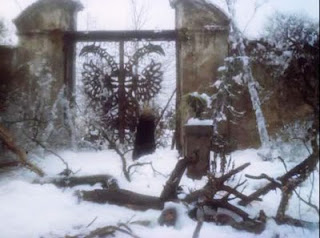 Most Beauty and the Beast stories focus on the girl, as she is sympathetic, and easy to identify with. The downside to this is that she is often only a cipher, lacking any real personality of her own. Cocteau gave us a tantalizing glimpse into his Beast's psyche, and Disney later made us privy to Their Beast's anxieties, Panna a Netvor puts us right inside The Monster's head -- and he steals the show. Because the character of Beauty is usually our touchstone in BATB stories, the Beast is often remote, and the audience isn't privy to his development. Disney solved this problem by giving him a number of servants to bounce dialogue off of. Herz gives Netvor a Gollum-like nemesis within himself. He hears (and we hear) an insidious whispering voice that plays upon his fears and mocks his fledgling relationship with Julie. Netvor argues with it, shouts at it, and cowers, hiding from it. Watching Netvor struggle against himself allows for expository dialogue, and gives us a glimpse into his mind. Ultimately, we feel more sympathetic for the multi-faceted Monster than for the (much less fleshed out) girl.

Vlastimil Harapes, a choreographer as well as an actor, plays Netvor with sensitivity, passion, and an athletic grace. Holding a candelabra, and moving slowly and gently when Julie is present, Netvor is twitchy and anxiety-ridden in his lair, pacing, leaping and cowering, gollum-like, as he argues with himself. Where it would have been easy to simply play "angry", Harapes engages in a subtle dance between enraged, hopeful and defeated. In one particularly poignant, dialogue-less scene, we see Netvor watching from a distance as Julie, unaware of him, considers running away. His relief when she stays is clear and palpable. Oftentimes, elaborate costuming (or these days, CG) has the effect of distancing us from a character, Harapes' subtle acting shines through, making Netvor terribly, beautifully real.

Panna A Netvor is not a perfect film. A good DVD transfer is difficult to find, and the movie missteps in places -- over-the-top camera work is often jarring compared to a normal hollywood film, the long introduction and dream sequence may lose some, and Studenkova is occasionally wooden. However, Panna a Netvor is a haunting, visceral variation on Beauty and the Beast that neatly avoids falling into the category of stereotype or imitation. The Monster is at once fearful and sympathetic, the atmosphere is appropriately wet and oppressive, and the final vision is utterly unique. Panna a Netvor takes the French fairy tale and makes it unquestionable Czech, but universally compelling.

Labels: Beauty and the Beast, film