Hansel and Gretel in 3D? 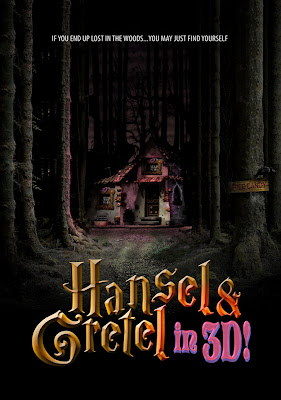 I really do need to start a spreadsheet to keep up with all of the possible fairy tale related films in development and production for the next few years. This time Hansel and Gretel is up for grabs.

From Michael Bay's The Institute to Produce Hansel and Gretel in 3D Source at ComingSoon.net:

Michael Bay's The Institue will produce Hansel and Gretel in 3D, an action-packed visual FX-filled version of the classic Grimm Brothers fairytale.

In addition to the infamous witch in the gingerbread house, the film showcases the legendary creatures of German mythology. These Teutonic beings will be designed by Joseph C. Pepe, the lead character designer from Avatar

. The film is live action.

The movie is scheduled for a spring 2011 shoot on location in Germany.

Is anyone else as worried about this one as I am?  There will be "legendary creatures of German mythology" in this tale?  The white dove or the duck they escape on?  Has anyone working on the film read the tale recently?

And may I add that while I have fully embraced ebooks, I am not anywhere near jumping on the 3D film bandwagon?
Posted by SurLaLune Fairy Tales at 2:20 PM