So while I have a lot of fun looking for multiple versions of stories in an ATU tale type when researching my books, for Puss in Boots and Other Cat Tales From Around the World my favorite section by far was "More Cat Tales" where I collected many, many other cat tales that I found. There are 94 tales in that section--more than one book all in itself--so I enjoyed the searching obviously!

The “More Cat Tales” section may be the most fascinating thanks to its wide breadth of content. One goal of this section was to include representative tales from other tale types known to have cats in them as well as dozens more tales that were not classified. Hence we see cats with a diverse representation.

Folktales with cats tend to use well-known cat traits to drive or at least embellish the stories. So we have cats that are intelligent, cunning, independent, loyal, helpful, and sometimes even menacing. They are rarely victims and often come out victors in any conflicts.

One of the rare examples of a victimized cat can be found in ATU 1370: The Lazy Wife Is Reformed. It is a disturbing but not uncommon tale, although I chose to share only one example of it in this collection as “The Lazy Cat” from Hungary. A housecat is held responsible for a lazy wife’s poor housework. The husband beats the innocent cat (and his wife while she is holding the cat) as a means of teaching the wife a lesson. The wife is ultimately “reformed” into a better housekeeper. The tale, while considered humorous in times past, will be offensive to many modern readers with its violence against women and animals as well as its overall moral.


I'll discuss more of the other represented tale types in coming days, but wanted to share the table from the book's end matter that shows many of the tale types I identified.

Most of the tales in the "More Cat Tales" section were NOT identified by tale type, but the best known cat tale types and some other familiar types I did identify and provide in the list. You can click on the images below to see them larger. 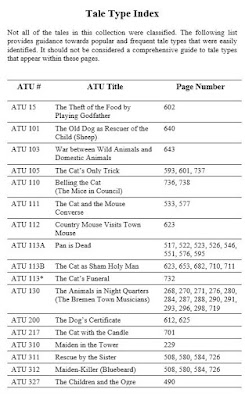 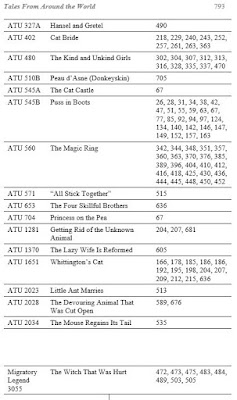 Posted by SurLaLune Fairy Tales at 11:29 AM