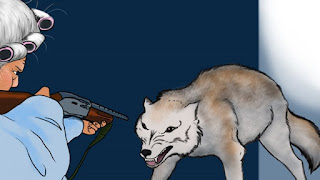 So SurLaLune tries to be apolitical as much as possible. So I am going to not comment but will share the following article and links from NPR and the NRA: NRA Rewrites Fairy Tales With More Firearms, Less Bloodshed by CAMILA DOMONOSKE

So far, there are only two data points. And they're imaginary. But the trendline is clear: In the NRA's reimagined fairy tales, putting rifles in the hands of children creates a safer world.

The NRA Family site published its first reimagined fairy tale — "Little Red Riding Hood (Has A Gun)" in January, and followed up with "Hansel and Gretel (Have Guns)" last week.

On Twitter, inspired by the series, a few people have been inventing their own #NRAfairytales, imagining tales that begin with "once upon a time" and end with a bang.

And that's all I have to say about that. Thanks to Val for sharing!
Posted by SurLaLune Fairy Tales at 10:25 AM