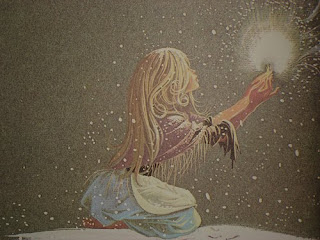 I enjoyed All I Want For Christmas... at Doc in Boots. Hope some of the wishes are fulfilled.

I'm especially eager to read Fairy Tale Queens. There's a chapter, "The Queen's Wardrobe: Dressing the Part," which could have been written especially for me! Although I'm also intrigued by "The Fairest of Them All: Queenship and Beauty." Every chapter looks fascinating and I have high hopes. 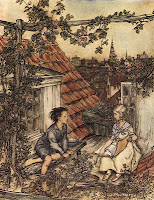 Read On The Snow Queen, Part 2 at Spinning Straw into Gold:

Though the devil's mirror and the Snow Queen are not direct accomplices, their methods are similar. The glass shards make Kai blind to the living beauty of the roses and only able to appreciate the inorganic geometry of the snowflakes.

And also Snow White's Stepmother at Spinning Straw into Gold:

I never tire of reading about, writing about, and watching Snow White. That said, I'm late to viewing this 90's film, Snow White: A Tale of Terror

It's grounded in a historical medieval Europe (there is mention of Paris and the Black Plague) and earned its title with suitably nightmarish scenes and plot details. There's definitely the elements of a horror film at work. Not to mention, A Tale of Terror preceded the dark fairy tale remakes now in vogue over a decade later. Think Red Riding Hood, The Brothers Grimm, and Snow White and the Huntsman.