New Ebook: Frog Prince and Other Frog Tales From Around the World 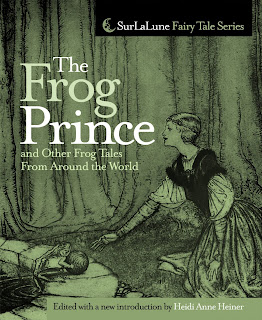 Last week I announced a new series of "Women in Folklore" books I'm publishing in Kindle eformat and potentially in paper versions, too. The first volume in the series is The Fairy Tale Fiction of Anne Isabella Thackeray Ritchie. You can read all about the format choices and thinking behind this series at the original post here.

This week I've also launched the first book in the SurLaLune Fairy Tale Series, The Frog Prince and Other Frog Tales From Around the World. For now it is available in Kindle format only, but I am working on other formats. (If you have a preference, please post or email me so I know where the demand is focused.)

From wise creatures to hapless victims, frogs appear in numerous stories around the world. Edited with an introduction by Heidi Anne Heiner of SurLaLune Fairy Tales, this volume contains over 100 fairy tales, fables, myths and ballads about frogs from around the world, including several variants of the well-known Frog Prince tales made famous by the Brothers Grimm and most recently adapted into a feature-length animated film by Disney.

This book is much more involved on my part since I spent many weeks researching and then editing and formatting the texts. I searched hundreds of books and found roughly 100 tales about frogs to include in this volume, including tales that stand alone and others that are variants of each other. Most of these tales are not available on SurLaLune nor are they gathered in such a large collection anywhere else on the web or in print. I've also written short introductions to many of them in addition to the expanded article I've included as an introduction to the entire collection.

If I find there is an interest in this and my other upcoming titles, I will consider offering them in other electronic formats (ePub, Sony, Microsoft, etc.) and even print editions. The electronic versions can be offered at less expensive prices, but I understand the appeal of a printed copy. I imagine most of these titles will be of interest to a very select and small audience, so I've decided not to use the traditional route of publishing them with an established publisher. I prefer that method for most books I read and purchase myself but most of my planned titles are cost prohibitive for a publisher. This volume, for example, would be roughly 400 to 500 pages in print. It will be relatively expensive to print.

Once again, if you are interested in this and other titles--I know I haven't announced them yet, but soon!--please post here or email me to let me know about your preferred formats. I'm doing all of the work on these books myself excepting the cover designs by my wonderful husband. That means all of the work from research to compiling to editing to formatting to writing is mine, so I would like to know where to focus if there are specific demands or interests. Otherwise, I will just continue with my own interests and instincts.

(And really, aren't the covers great? John has already designed eight covers for me with a few more on the way. I won't share until they are ready for publication, but I'm excited and thankful for his work.)
Posted by SurLaLune Fairy Tales at 8:00 AM