My Fairytale: Theatre in Solvang, CA 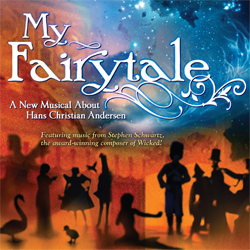 I've previously written about Solvang and the musical, My Fairytale. The play finally had its USA premiere last week in Solvang and the reviews have been positive. There are some successful names behind the production, so that is encouraging. I only wish I still lived in LA so I could drive up and see the play.

About the musical from its press release:

PCPA Theaterfest is proud to present the American Premiere of My Fairytale, a musical about Hans Christian Andersen directed by Scott Schwartz. My Fairytale previews in Santa Maria August 12 - 20, then opens in Solvang’s Festival Theater running from August 26 through September 25, 2011.

The musical is an enchanted journey into the imagination of one of the worlds’ greatest storytellers - it’s a place of wonder, mystery and danger, and where Andersen is confronted by the characters from his fairytales. His quest is to find the Nightingale for the ailing Emperor, but he is continually kept him from his goal, being sidetracked by the fairytale characters, a boy, and a shadow.

My Fairytale was originally produced in Denmark in 2005 in honor of the bi-centennial of Hans Christian Andersen’s birth. Director Scott Schwartz pointed out that this first American production, besides being presented in English for the first time, includes the introduction of puppets, some script rewrites, and additional music by Stephen Schwartz, which will make My Fairytale feel more like a world premiere production. And, it will only be seen at PCPA.

This breathtaking production is filled with a powerful score created by Stephen Schwartz, the award-winning composer of Wicked

. The book is by Philip LaZebnik (Pocahontas

), and it was originally created by Flemming Enevold, the famous Danish actor and singer. 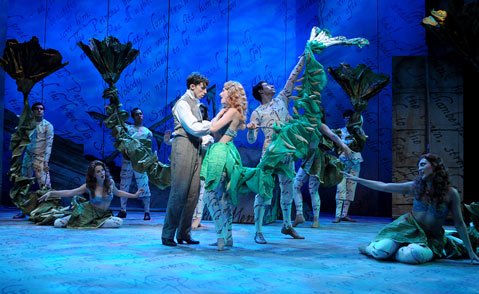 From My Fairytale at Solvang Festival Theater: U.S. Premiere of Musical Set in the Imagination of Hans Christian Andersen Plays Through September 25 by Charles Donelan:

With the terrific new musical My Fairytale, Solvang enters its second century through the cosmic portal of Hans Christian Andersen’s imagination. PCPA and producer Michael Jackowitz have assembled a brilliant team to design, direct, and perform the vision supplied by Stephen Schwartz (composer) and Philip LaZebnik (author). Beginning with the lifelong conflict that Andersen experienced between his ambition to produce serious works of theater and his propensity to spin out fairy tales with seemingly childish subjects, the show demonstrates that these aims are not merely compatible but complementary.

Andersen, who is wonderfully played and sung by Kevin Cahoon, crashes a reception for the singer Jenny Lind in the opening scene, only to be rebuffed when he indicates that he would like to write a show for Lind and that he intends to audition for the job by putting on a puppet show. Left alone overnight in the Royal Danish National Theater by the snobby board of directors, Andersen anticipates his scheduled morning meeting with the sympathetic Lind by literally diving into his imagination. After a rousing number called “Andersen’s Shadow,” two figures, Andersen and his Shadow (Erik Stein), tumble into the puppet case, only to emerge moments later in a fantasy world that’s entirely constructed out of the figments of Andersen’s overflowing imagination.

Information about tickets, location and dates can be found here.
Posted by SurLaLune Fairy Tales at 1:55 PM