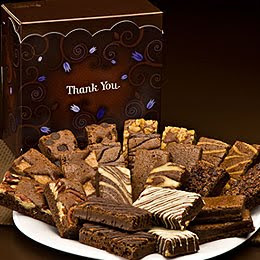 Three weeks ago, one of my fairy godmothers sent me a box of Fairy Tale Brownies as a surprise gift. They were a wonderful surprise, discovered on my doorstep, the shipping box wrapped in plastic and sprinkled with snow just after midnight when I returned home from the hospital where my new niece entered the world. I was tired and happy and chocolate deprived.

I pried open the box, discovered a charming package inside, all brown and purple, with lots of individually wrapped brownies inside, two of each flavor so I could share with John who was perhaps even more excited than me.

Now that I have sampled all of the flavors (except the coffee--John ate those both the first night with my blessing since I don't like coffee flavor), I can say these are fine brownies. I was surprised that what I expected to be my favorites were not. I'm usually a caramel or mint chocolate girl, but these two were some of my least favorites. My favorites were cream cheese (not a surprise), toffee, chocolate chip (really big chips, more like chunks) and even the white chocolate. The walnut and pecan were runners up as well as the original. I'm not a peanut butter or raspberry girl--give me orange instead--but those were fine brownies, too. So overall, a great and unusual treat.

I've been aware of Fairy Tale Brownies for years, so it was fun to finally see what they were like. The tasting was even better, of course. These make an unusual gift instead of the usual chocolate or cookies, at least in my family where brownies are one of the treats of choice!

And thanks, Kim, for for the great gift. It was delightful.