East Of The Sun, West Of The Moon by Jackie Morris

East of the Sun, West of the Moon

by Jackie Morris, both author and illustrator, was released earlier this year. I kept saving it up for when I discussed East of the Sun for the release of Beauty and the Beast Tales From Around the World

While this book is richly illustrated, it is not a short picture book. The page count is 176! (Which makes it a bargain since it is priced like a traditional 32-40 page picture book.) Morris also takes some liberties with the story, this is not a straight retelling of the traditional tale, but her own interpretation with a different ending.

And don't miss Jackie Morris's blog entry about writing and illustrating the book at In Between the Lines.

Here are some illustrations: 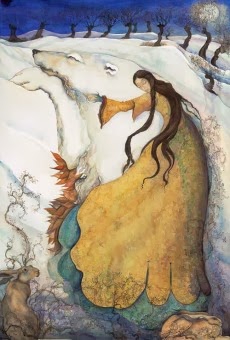 An extended version of the Norwegian fairy tale, set in the 21st century.

From the moment she saw him, she knew the bear had come for her. How many times had she dreamt of the bear... Now, here he was, as if spelled from her dreams. "I will come with you, Bear," she said. It is the beginning of an extraordinary journey for the girl. First to the bear s secret palace in faraway mountains, where he is treated so courteously, but where she experiences the bear s unfathomable sadness, and a deep mystery... As the bear s secret unravels, another journey unfolds... a long and desperate journey, that takes the girl to the homes of the four Winds and beyond, to the castle east of the sun, west of the moon. This beautiful, mysterious story of love, loyalty and above all, freedom, is inspired by fairy tale, and is magically told and illustrated by Jackie Morris.

Beautifully and lyrically written, the story develops the characterisation of the white bear, the girl and the four winds, and suggests a possible new ending, in which the girl rescues the prince, but sets him free, without the resolution of marriage at the end of the story.

"Jackie Morris has updated and re-imagined the tale of East of the Sun, West of the Moon for a new generation of readers, upsetting the boundaries of happy endings and asserting that heroines are not obligated to move in expected patterns" - Robin Hobb

Jackie Morris lives in a small house by the sea in Pembrokeshire, Wales, where she writes and paints. She has two children, Tom and Hannah, a small pack of dogs and a small pride of cats. Her picture books for Frances Lincoln include The Ice Bear, The Snow Leopard, Can You See a Little Bear?, The Cat and the Fiddle: A Treasury of Nursery Rhymes, and How the Whale Became by Ted Hughes. East of the Sun, West of the Moon has lived somewhere in the back of her mind from the first time she ever heard it. Jackie says, "There are some stories that when you hear them for the very first time it is as if you know them, as if they are part of your soul. You then spend the rest of your life trying to understand them. This story is one of those for me." 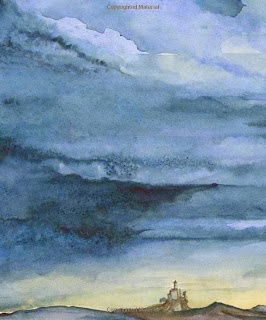 Above and below are the endpapers for the book, those pages inside the cover. Lovely. 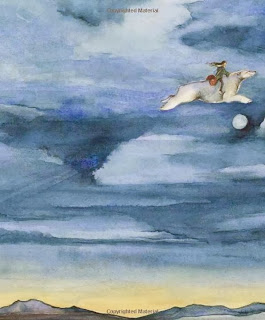 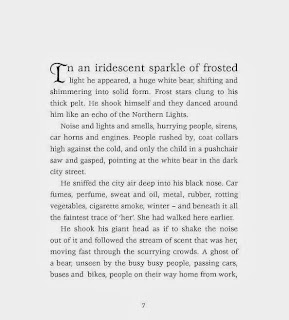 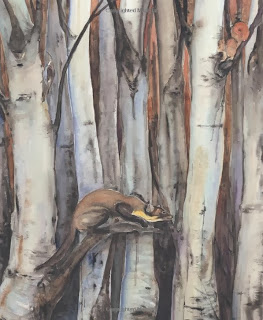 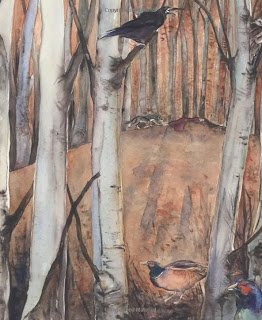 Posted by SurLaLune Fairy Tales at 9:14 AM

Labels: Beauty and the Beast, East of the Sun and West of the Moon, illustration