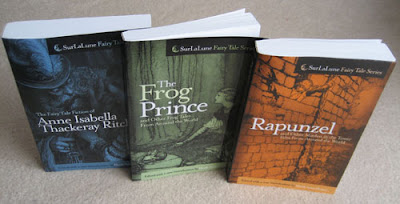 I've been feverishly working on these lovelies the past several weeks as well as an upcoming title.  The picture above is of the proofs and there are some slight changes that will appear, but overall, the books are going to be beautiful.  At least I think so!  If all goes well, they should be available for ordering on Amazon or through your favorite bookseller by mid July or the end at the latest.  They will also be available through Baker and Taylor for libraries and other academic institutions.

I will post more about the individual titles when they are finally available to order.  They are slightly newer versions of the books I published on the Kindle last year, and I will be updating the Kindle editions accordingly.

The next title is my most ambitious yet, Sleeping Beauty and Snow White Tales From Around the World.  I preferred Sleeping Beauties: Tales From Around the World, but Snow White dominates the collection and we decided that she should appear in the title for that reason.  I myself have translated more than ten tales into English for this collection in addition to several more by other translators and collectors.  There will be at least 40 stories in the collection overall--probably between 50-60 when all is done.  But I'll share more about that closer to release date sometime late summer or early fall...

All of these collections greatly expand on what has been previously available on SurLaLune, including newly translated tales and some that have been virtually hidden for many years that are not available on the website.

Now the next question is what titles do you most want to see in the future?  In my researching, I have the beginnings of several collections.  In the long run, I plan collections for Cinderella, Beauty and the Beast, Godfather Death (and other death tales), Bluebeard, Puss in Boots (and other cat tales), Twelve Dancing Princesses, Hansel and Gretel, Diamonds and Toads (Kind and Unkind Girls), Six Swans and Swan Maidens to name several.  Which titles appeal to you the most?

Edited to add that I have also added a poll at the bottom of the blog for you to vote on preferred titles.  I'm working on some level on all of them, but am deciding which ones should take priority.
Posted by SurLaLune Fairy Tales at 4:14 PM