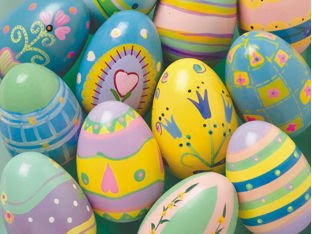 Many children today are out hunting Easter Eggs which has inspired me to offer up the folklore of Easter Eggs.

Easter falls in the spring, the yearly time of renewal, when the earth renews itself after a long, cold winter. The word Easter comes to us from the Norsemen's Eostur, Eastar, Ostara, and Ostar, and the pagan goddess Eostre, all of which involve the season of the growing sun and new birth. The Easter Bunny arose originally as a symbol of fertility, due to the rapid reproduction habits of the hare and rabbit.

The ancient Egyptians, Persians, Phoenicians, and Hindus all believed the world began with an enormous egg, thus the egg as a symbol of new life has been around for eons. The particulars may vary, but most cultures around the world use the egg as a symbol of new life and rebirth. A notation in the household accounts of Edward I of England showed an expenditure of eighteen pence for 450 eggs to be gold-leafed and colored for Easter gifts. The first book to mention Easter eggs by name was written five hundred years ago. Yet, a North African tribe that had become Christian much earlier in time had a custom of coloring eggs at Easter. Long hard winters often meant little food, and a fresh egg for Easter was quite a prize. Later, Christians abstained from eating meat during the Lenten season prior to Easter. Easter was the first chance to enjoy eggs and meat after the long abstinence.

From The Holiday Spot which argues somewhat against the pagan attributions:

It is the influence of the traditional spring rites that made Easter so egg-special. And myths coming down to us from an incredibly distant past have shown man's relationship with the egg to be very deep seated one. This is caught in old Latin proverb: "Omne vivum ex ovo". This means "all life comes from an egg". Not just the Latin saying, eggs are just laid well over all corners of the world. From ancient India to Polynesia, from Iran, Greece, and Phonecia to Latvia, Estonia, and Finland, from Central America to the west coast of South America, there are reports of myths of the whole universe created out of an egg. Thus, it is not unusual that in almost all ancient cultures eggs had been held as an emblem of life. The concept of all living beings born from an egg is also a foundational concept of modern biology.

But how did eggs come to be associated with Easter?

Despite claims being made that Easter Eggs were originally pagan symbols, there is no solid evidence for this. It was not until the 18th Century that Jakob Grimm theorised a putative pagan connection to Easter Eggs with a goddess of his own whom he named Ostara, a suggested German version of Eostre.

At the Passover Seder, a hard-boiled egg dipped in salt water symbolizes both new life and the Passover sacrifice offered at the Temple in Jerusalem. The ancient Persians painted eggs for Nowrooz, their New Year celebration falling on the Spring Equinox. This tradition has continued every year on Nowrooz since ancient times.

It was during Easter that the consumption of eggs resumed after the strict Lenten fast. Eggs were thus a mainstay of Easter meals, and a prized Easter gift for children and servants. And this is probably the reason why eggs came to be associated with Easter.

Orthodox Christians in the Middle East and in Greece painted eggs bright red to symbolize the blood of Christ. Hollow eggs (created by piercing the shell with a needle and blowing out the contents) were decorated with pictures of Christ, the Virgin Mary, and other religious figures in Armenia.

Germans gave green eggs as gifts on Holy Thursday, and hung hollow eggs on trees. Austrians placed tiny plants around the egg and then boiled them. When the plants were removed, white patterns were created.

The most elaborate Easter egg traditions appear to have emerged in Eastern Europe. In Poland and Ukraine, eggs were often painted silver and gold. Pysanky (to design or write) eggs were created by carefully applying wax in patterns to an egg. The egg was then dyed, wax would be reapplied in spots to preserve that color, and the egg was boiled again in other shades. The result was a multi-color striped or patterned egg.

For further reading, An Egg at Easter: A Folklore Study By Venetia Newall is out of print but available used or perhaps through your favorite library.

(The image came from Southern Mamas.)
Posted by SurLaLune Fairy Tales at 8:56 AM