ABC's OUAT: Skin Deep and Beauty and the Beast

Before I start berating it, this was my favorite scene this week. The power of a name is always interesting and I am curious as to what the writers plan to do with all of this name power. When we find out in season 5.

SPOILERS BE HERE, SO BEWARE

Okay, folks. It's been way too quiet around here in the comments. And I am craving discussion of this past weeks OUAT on ABC, the much anticipated (and sometimes dreaded) Beauty and the Beast episode, "Skin Deep."

What did you think of it? I feared the worst, so I wasn't nearly as disappointed. I have more quibbles than I can discuss here, but I want to leave room for you to agree or disagree anyway.

But I admit to cringing at Chip the Teacup becoming the talisman of Rumpelstiltskin's lost love in Belle. Chip? The Teacup? Why? And, no, a chipped teacup wouldn't have bothered me as much if I hadn't know it was CHIP, an animated child character. Am I overreacting? Of course. But I am still annoyed. The Disney animated references were more intrusive than simple winks at the audience for me. It was almost parody more than anything else. 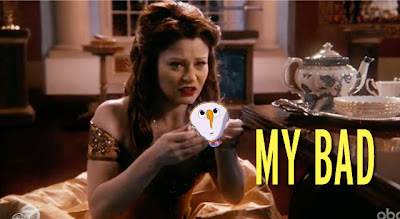 The image comes from TV.com's review which hit many points for me, so go there for better criticism than I can produce right now. I am not a good tv critic. I laughed and nodded my head while I read it, so that's a good thing. Most of the online discussion has been positive actually. I feel like a grinch, but perhaps I just hate the meandering storytelling. We'll probably see Belle again in, oh, season 3.
Either way, Rumpelstiltskin is certainly much more interesting as a character and villain than Regina since he has an emotional history we can relate to in some way. Regina is just silly. I find her character less and less believable as a villain. She comes across more as a spoiled child whose father should have put her in time out more often, nevermind she may have killed him earlier than she did if he had. She's a rather ineffective psychopath.

And, yes, I am going to keep watching. Because I am entertained on some levels. But now I know why I really hate these long, drawn out series in which nothing really happens. We watch for one or two clues a week, perhaps for years. Sigh..... My personality doesn't mesh with this kind of storytelling.

Okay, one final note: This version of B&B leaned into the interpretations that make so many people hate B&B. The girl is trying to reform and save the beast who hasn't shown any redeeming qualities. This "love" was more like Stockholm Syndrome. He didn't beat her when she chipped a cup so he must be a good person. Huh. The writers relied on us implying love from the fairy tale tropes, not actually showing us a reason for it to actually exist here. In contrast, we, as viewers, see him doing some pretty nasty stuff when she's offscreen so we should believe in it even less. I worry....
Posted by SurLaLune Fairy Tales at 4:59 AM

Labels: Once Upon a Time (ABC), tv