If I Were in Charge of the World and Other Worries: Poems for Children and Their Parents by Judith Viorst

If I Were in Charge of the World and Other Worries: Poems for Children and Their Parents

by Judith Viorst is today's featured book with excerpted poem.
First of all, total fan moment. Who here adores Viorst like I do? My crush started at a very young age with one of my all time favorite picture books, Alexander and the Terrible, Horrible, No Good, Very Bad Day. It is a regular part of my family's points of reference. "Even in Australia..." And I even have a French version from when I translated it for a French class years ago. I have loved Alexander since before I could read and I don't think I will ever stop.

Then I grew up and discovered that Viorst is great for grown-ups, too. I own several of her books, especially the ones about aging, although I haven't reached most of those decades myself yet. I also have some of her poetry books, not the least because she has fairy tale poems in them. Today is If I Were in Charge of the World and Other Worries: Poems for Children and their Parents. Tomorrow I will feature another of her collections because I am that much of a fan.

Today I am offering an image of Viorst's poem, "And After Many Years, A Brave Prince Came At Last To Rescue the Princess." It's Viorst's take on Rapunzel.  I also thought it made a nice contrast to yesterday's Rapunzstiltskin poem by Liz Lochhead.There are a few more fairy tale poems in this collection but this is one of my favorites. If you want to see the other poems, most are visible in the online Amazon preview through the Look Inside the Book feature

. Again, this poem is copyrighted and offered as a preview of the book which is inexpensive and slim and totally deserves a place on your shelf whether you are a kid or a grown-up. 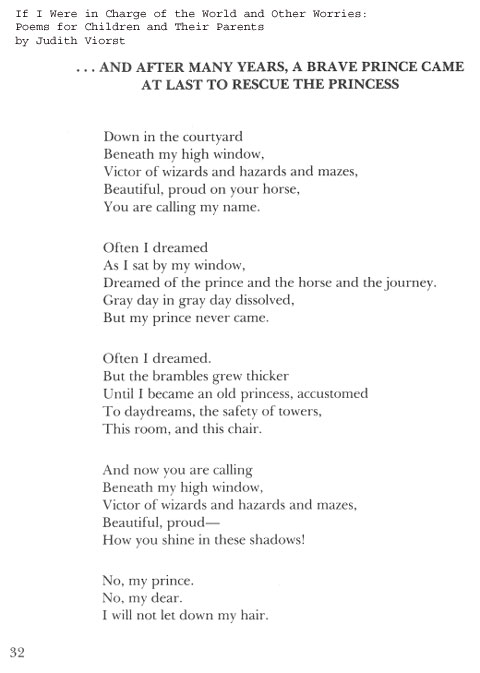 And while we're here, more great books by Viorst. Some of these would make great Mother's Day gifts actually.

And if you know a little girl begging for an ear-piercing or earrings in general, this is a superb book:

And Viorst contributed to What the Dormouse Said: Lessons for Grown-ups from Children's Books