Beginning with O and Cinderella by Olga Broumas

by Olga Broumas with one excerpted poem is today's poetry feature. Olga Broumas's first poetry collection published in 1977 was Beginning with O. Most of the poems draw inspiration from mythology and folklore, including seven well-known fairy tales.

From the book's back cover:

In Stanley Kunitz’s last year as judge of the Yale Series of Younger Poets competitions, he chose Olga Broumas’s Beginning with O as the winning volume. Of it he said:

Because of their explicit sexuality and Sapphic orientation, Broumas’s poems may be considered outrageous in some quarters, but I believe they are destined to have more than a succes de scandale. Beginning with O is as much a political statement as it is an impassioned lyric outburst. It is a book of letting go, of wild avowals, unabashed eroticism; at the same time it is a work of integral imagination, steeped in the light of Greek myth that is part of the poet's heritage and imbued with an intuitive sense of dramatic conflicts and resolutions, high style, and musical form.

While there are many more poems in the collection, the fairy tale specific ones are:

I have a screen capture of one of the poems, Cinderella. This is copyrighted and available as part of the book preview online intended to encourage purchasing the book

. Once again, I did not transcribe it so as to discourage copying and pasting by readers. While many of the poems would rate a content warning for younger readers, Cinderella is non-explicit and "safe" for most audiences. 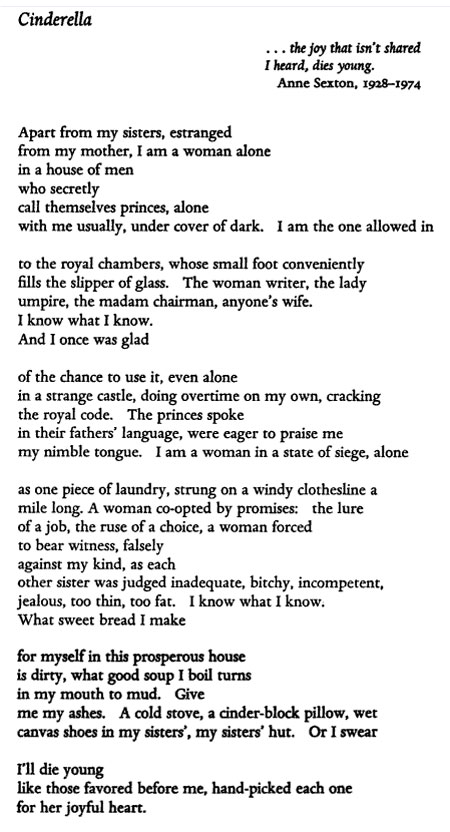 Posted by SurLaLune Fairy Tales at 9:19 AM