Beauty and the Beast: Recommended Reading Part I 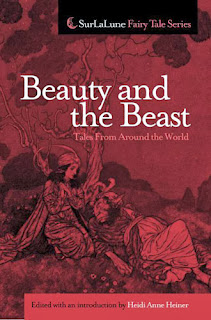 One of the challenges of discussing Beauty and the Beast is figuring out where to begin. Beauty and the Beast Tales From Around the World is an anthology that helps you explore the history of the tale with a relatively short introduction considering the massive size of the book. It was tempting to write a much longer introduction but it was important to stay with the main objective--to share the tales--especially since there are some wonderful books already published that discuss the tale in much greater depth.

So today, I'm going to recommend other books, not my own. The ones that were important tools for me during my hunt for tale after tale. And the ones that allowed me to say, "Don't write that, refer your readers to the greater analysis available in _________."

In other words, if you are an avid Beauty and the Beast fan, these books need to be in your library.

The Tale of Cupid and Psyche: An Illustrated History

by Sonia Cavicchioli is quite simply a gorgeous book. You can own it for the artwork alone, never reading a word. But it also includes wonderful discussion of the story that essentially started it all, Cupid and Psyche, which I will be discussing in greater depth in future days. The book includes a version of the tale and an overview of it's appearance throughout history with some solid analytical discussion, too.

Once upon a time there lived a king and queen who had three very beautiful daughters....It was only just possible to find words of praise for the elder two and to express the breath-taking loveliness of the youngest...was beyond all power of human speech. Every day thousands of her father's subjects came to gaze at her, foreigners too, and were so dumbfounded by the sight that they paid her the homage due to the Goddess Venus alone.

The passionate love story of a god and an exquisitely beautiful mortal woman, the myth of Cupid and Psyche has fascinated Western culture since the Middle Ages. First appearing as a long aside in Apuleius's The Golden Ass in the second century AD, this romance has inspired countless works of art in an astonishingly wide range of media. Gathered here is a selection of these numerous works, from monumental fresco cycles, to easel paintings and wedding chests, from miniatures, tapestries, and stained-glass windows, to marble and porcelain sculptures. Many are considered masterpieces of European art.

The sheer number and beauty of the works this myth has inspired is a testament to the power and richness of the story. The lovers are often portrayed as children to suggest their eternal youth and immortality. In some scenes they are shown kissing, in others, tormenting each other, expressing the extremes of joy and suffering that beset all lovers. The changing tastes and sensibilities of different periods are reflected in Psyche's appearance, evolving from courtly and Baroque to neoclassical and Pre-Raphaelite. For the modern age, it is the dual nature of Cupid and Psyche's love, on the one hand deeply spiritual, and on the other intensely sensual, that has resonated most powerfully.

"It seems," noted Walter Pater, the nineteenth-century British critic, of Apuleius's story, "that one can see and touch the blond hair, the fresh flowers, the precious works of art of which he speaks." Thanks to the extraordinary artworks included in this book, we can indeed see, if not touch, the splendors of Apuleius's story. 96 color illustrations, 128 in b/w.

The next book is The Tale of Cupid and Psyche

by Jan-Ojvind Swahn. Published in 1955, it is long out of print and somewhat rare but not impossible to find by any means. I have owned a copy for several years and mine was uncut--that was an evening of fun, cutting fragile pages and creating paper dust and bits everywhere! But this is the full study of ATU 425 tales, those most closely related to Beauty and the Beast (which is ATU 425C). Similar in nature to Marian Roalfe Cox's Cinderella, Swahn analyzes in great detail over 1,000 variants of the tale with a survey table that consists of 30% of the book. Many have never been translated into English and a large percentage have never been published in any language but exist in manuscript collections.

Many of the tales in Beauty and the Beast Tales From Around the World are listed by Swahn, although my book includes others he either dismissed or missed. The scope of my book also goes beyond ATU 425 to other Animal Bridegroom stories. But the work is impressive, especially with it done before the age of computer tools. And it is a way to compare and understand the expanse of this tale type.

I also translated a few into English that I have never seen translated previously, but again, that's for future days on the blog.

And, wow, I still want to build a database of tales. That project is coming someday. Whenever I get the personal bandwidth and funding to support it. I've been dreaming about it for years....

These aren't all of the books--I'll be sharing more tomorrow, so stay tuned.
Posted by SurLaLune Fairy Tales at 12:06 PM

Labels: Beauty and the Beast, books, Cupid and Psyche